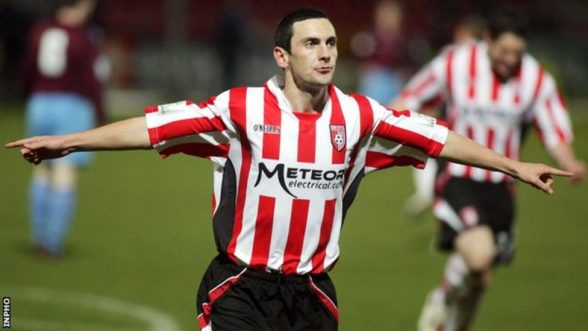 SADNESS AS MARK FARREN LOSES HIS BATTLE AND PASSES AWAY Farren, 33 was diagnosed with having a benign brain tumour in 2008 and was forced to retire from football.

However, in 2011 he returned after successful surgery to Derry City and in 2012 surpassed Liam Coyle to become Derry City’s all-time leading goalscorer.

Unfortunately, the cancer returned – and earlier in 2015 he was diagnosed with having a grade four brain tumour.

It a message, Derry City FC said: “It is with great sadness that we learn this morning of the passign of the clubs all-time top goal scorer Mark Farren.”

Derry GAA tweet: “Condolences to the Farren family and all associated with @derrycityfc on the sad passing of Mark. RIP.”

“A great footballer & gentleman. My thoughts with Terri-Louise & their families.”

Over 40,000 was raised and Farren had surgery in August last summer.

However, it was sadly announced this morning that Mark Farren had passed away earlier this morning.

Declan Devine: ‘I’m not celebrating, we have...

Declan Devine to be unveiled as Derry...