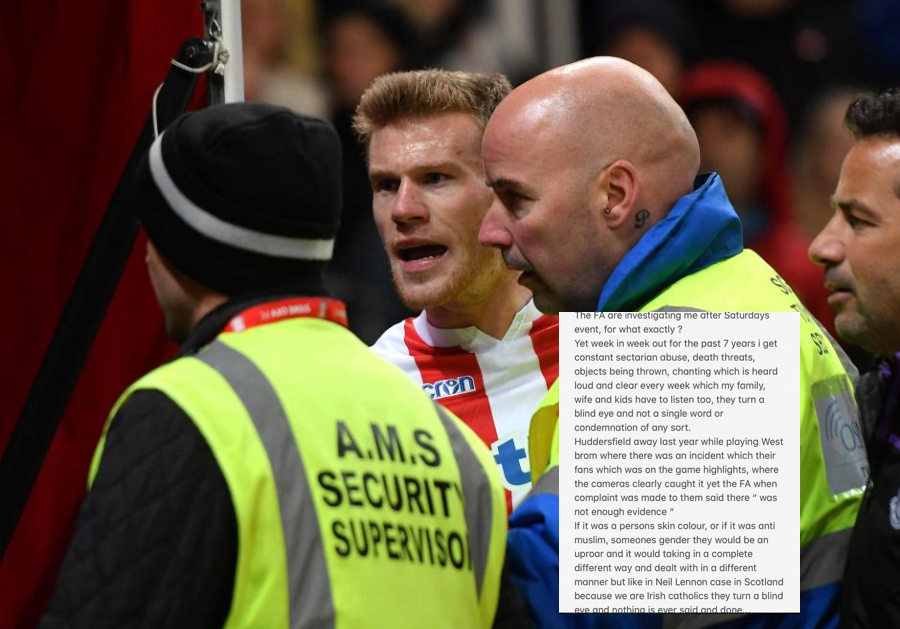 JAMES McClean has put the English Football Association on blast accusing them of being anti-Irish and anti-catholic.

Footage posted on social media showed Middlesbrough supporters in a corner of Stoke’s bet365 Stadium hurl abuse at the Republic of Ireland international, who came on as a late substitute in the 0-0 draw between the two sides on Saturday afternoon.

The winger was targeted following his refusal to wear a Remembrance Day poppy.

Following the incident, the 29-year-old labelled his abusers as ‘uneducated cavemen’ and declared that he was a ‘proud Fenian’ – prompting the FA’s investigation.

Now Mr. McClean has responded via Instagram writing: “The FA are investigating me after Saturday’s event, for what exactly?”

“Yet week in week out for the past seven years I get constant sectarian abuse, death threats, objects being thrown, chanting which is heard loud and clear every week which my family, wife and kids have to listen too. They turn a blind eye and not a single word or condemnation of any sort.”

The former Derry City, Sunderland, Wigan and West Brom player said if the incident has been racist, Islamophobic, sexist or homophobic it would have been dealt with in a ‘different manner’.

“But like the Neil Lennon case in Scotland because we are Irish Catholics they turn a blind eye and nothing is ever said and done.”