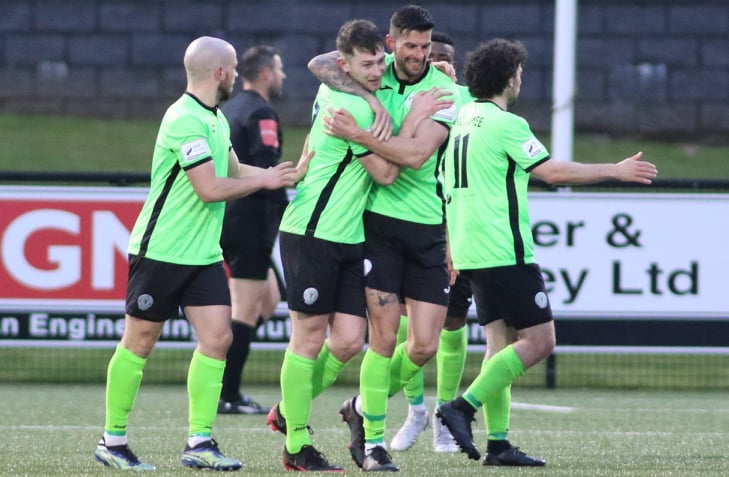 written by Chris McNulty May 3, 2021
ShareTweet

ADAM Foley bagged the dramatic winner to secure a first EVER League win at the Brandywell for Finn Harps.

By Chris McNulty at The Brandywell. Pictures by Joe Boland, North West Newspix

Just when the derby spoils looked to be shared, Foley latched onto a superb pass from the excellent Barry McNamee.

With four goals to his name already in 2021, Foley was just the man Harps wanted in that area. The Dubliner made no mistake with a cool finish to seal a historic win.

Harps had to come from behind to take victory at a venue has spooked their teams over the years.

Last year, Adam Liddle landed a 95th minute equaliser to deny Harps. Even here, the hearts stopped when Eoin Toal looked as if he might rescue a draw for Derry.

The goal frame had its say as Ruaidhri Higgins was left taste defeat for the first time as Derry’s manager. 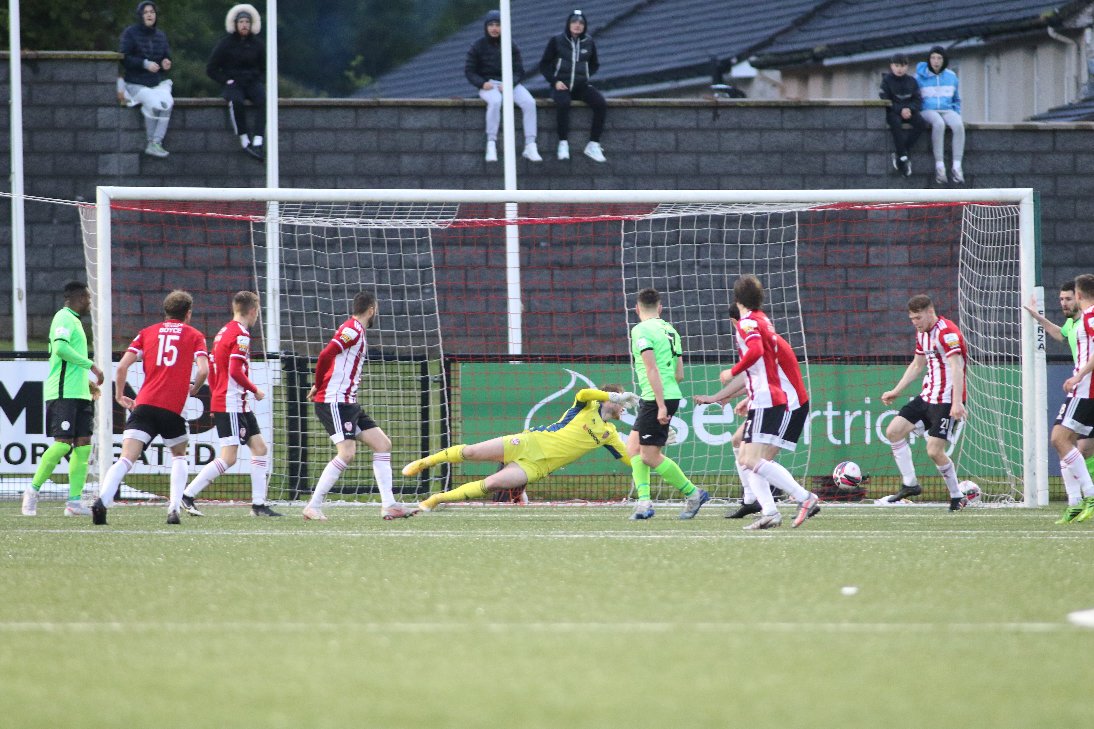 Barry McNamee’s free kick, dipped dangerously to the far post, caused all sorts of difficulty. Nathan Gartside’s punched clearance bobbled into the path of O’Sullvian, whose shot from the edge of the area went in via Cameron McJannet’s boot.

It was Harps’ first goal in 416 minutes, going back to Dave Webster’s last-gap winner against Waterford last month.

Derry sought an immediate riposte and Mark Anthony McGinley had to turn away McJannet’s low drive on the hour.

McJannet was the hero on Friday night with a late winner at Dalymount Park, where Derry made it two wins from two under Higgins’ guidance.

They could have been on the way to three-from-three here, but Akintunde riffled over the top after Jack Malone struck the post. 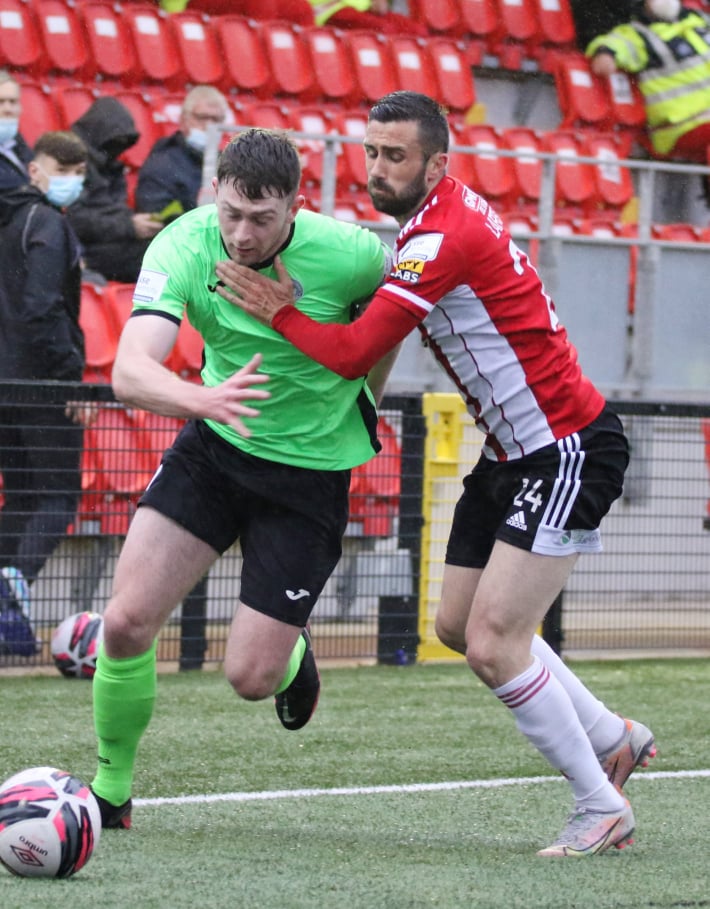 With the time ticking, slower it seemed, Foley was soon cupping his ears towards the Derry supporters on the lofty makeshift vantage points on the Brandywel Road.

Against the run of play, Derry hit the front in this derby.

Akintunde, cutting in from the left-hand side, got the better of Dave Webster and Kosovar Sadiki and his shot – Derry’s first of the evening – beat visiting goalkeeper Mark Anthony McGinley.

Harps began with a real purpose and McNamee nearly retuned to haunt his old employers in the second minute.

McNamee had two spells on Foyleside, where he emerged as one of the League’s bright stars a decade ago.

There were only 84 seconds on the stopwatch when MaNamee got a faint touch to O’Sullivan’s cross; the former City captain unable to turn past Nathan Gartside.

It was a move that gave Harps an early rise, though, and Derry were grateful to see O’Sullivan’s attempt deflect away for a corner after they had failed to clear from Mark Russell’s delivery. 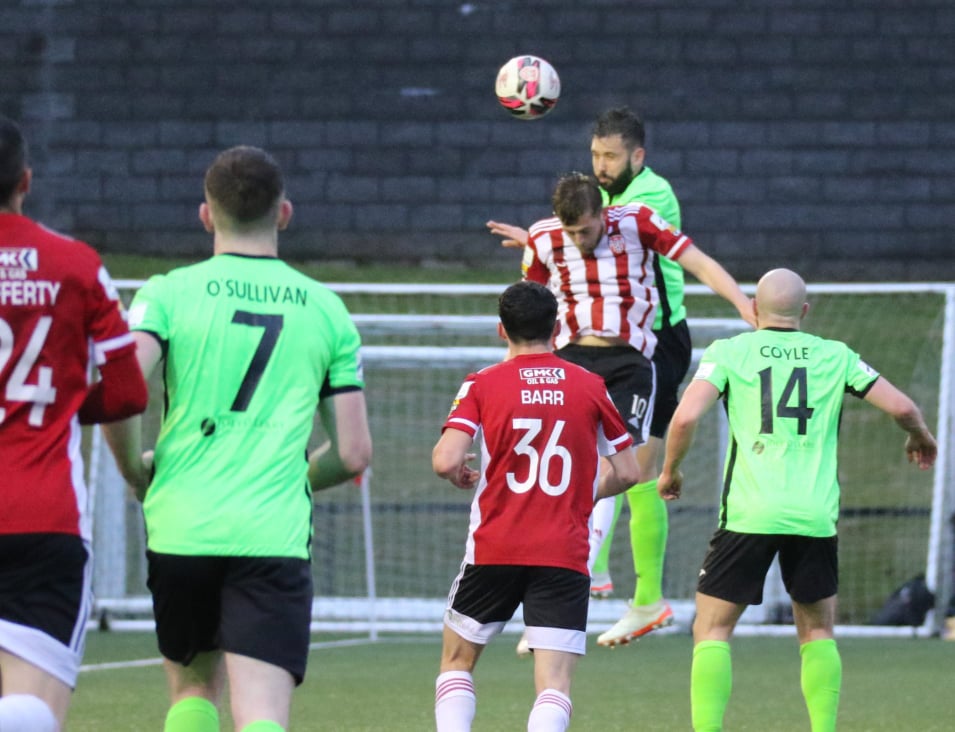 Tunde Owolabi, the former FC United of Manchester striker, was given his first start in Harps’ colours and the lively frontman almost made an impact on 14 minutes. A gamble paid off when the ball fell right for Owolabi in around the back of the City defence, but the striker was denied by Gartside.

Akintunde’s opener arrived against the grain and Derry might have added a quick fire second, though McGinley turned away Will Patching’s curler from 25 yards.

After a sequence of four games without a win – or a goal – Horgan restored Russell and Stephen Folan to his XI, with Owolabi also elevated.

Russell had the top shelf in his sight when he broke to connect with McNamee’s corner, but the Scot’s whizzed his effort past the target. 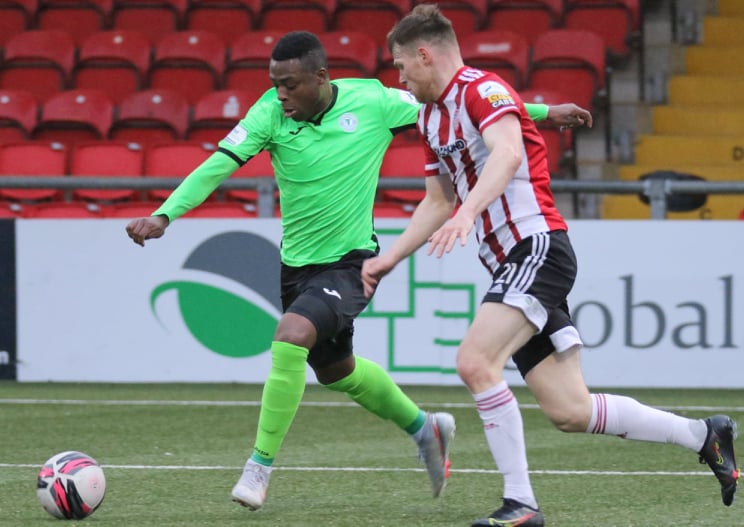 If that served as a shot across the Candystripes’ brows, Will Seymore was a lick of paint from a stunning equaliser on the stroke of half-time. As Seymore crept into Derry territory, opponents stood off and the American rattled the crossbar with a thumping go from long range.

Patching clipped the top of McGinley’s crossbar with an ambitious free kick just after the break and Harps were soon back on terms.

The tie hung on the edge of the blade, but Foley pounced for a goal and a moment that will live long down Navenny Street.