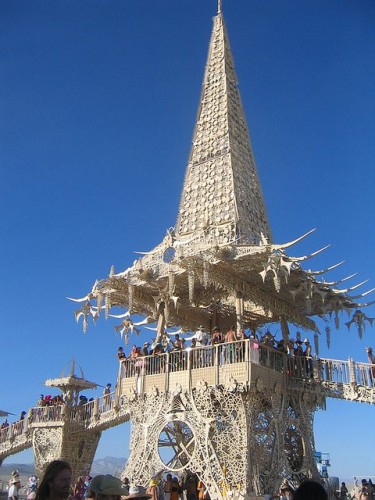 FIRST FOR CITY: DERRY TO GET TEMPORARY TEMPLE David Best, the man behind the popular ornate temples at Nevada’s Burning Man Festival, is to construct a similar structure in Derry.

Partnering with Artichoke, a London-based creative company, Best aims to bring his ephemeral temple structures to the Waterside next year.

Through the Kickstarter campaign for the project, he cites the problematic clashes in the region as a reason for bringing his work across the Atlantic.

The temple will be made of recycled plywood.

After construction, the temple will be opened to the public who are encouraged to bring mementos add personal messages to the temple. True to the Burning Man mores, the Temple will be burnt during a special ceremony.

David has planned a two-week construction period for the building with a target opening date of March 2015.

According to the artist, the burning keeps the temple ephemeral, which is important because “to fully let go of the past, nothing physical could be left behind.”

The team has partnered with local agencies such as the Nerve Center, Department of Employment and Learning and the Waterside Neighborhood Partnership to facilitate training for the locals.

The Nerve Centre’s Fablab will house the computer-aided design (CAD) training for the temple while the other agencies will engage relevant construction training for local schools.

The Arts Council of Ireland has lent a hand with raising half of the needed funds for the project and the newly-established Burning Arts Program has also provided additional support for the programme.

The Burning Man Festival is held annually in the deserts of Nevada and has been growing in popularity since its inception in 1986.

Today, it attracts upwards of 70,000 people to a week-long music and counter-culture partying.

David Best and his team have been building temples in the festival since 2000, including last year’s Temple of Grace:

Visitors to Burning Man often use these temples as a venue to get over the loss of loved ones by bringing in photos, personal messages and memorabilia to decorate the structure.

In the last day of the event, all the structures are burnt as a sign of closure, bringing catharsis to people and helping them move forward from a painful past.