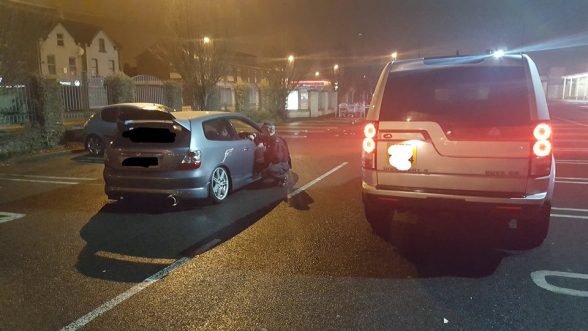 COPS IN DERRY CRACKDOWN ON ‘BOY RACERS’ AND THEIR TINTED WINDOWS POLICE are vowing to take action against ‘boy racers’ and their souped up engines causing a nuisance to residents in Derry.

And they say they will also be pulling in drivers who over done it with the tinted windows.

PSNI Foyle say on its Facebook page: “Foyleside and the Moor NPT have continually received complaints from residents of Strand Road and the City centre in relation to modified vehicles and the excessive noise that they have been making.

“If you choose to “cruise” the City centre, please remember your obligations to do so legally.

“We have warned drivers in relation to them causing alarm and distress to the public and if they repeat this selfish behaviour, police will be seizing their vehicles.

“We have also taken enforcement action against a number of motorists in relation to heavily tinted glass.

“If your front windows or windscreen allow less than 70% of light through, the tint is illegal and police have the technology to act on this.

“We are not trying to stop people enjoying their motoring, but if you can’t see through your windscreen you are endangering yourself and other road users particularly pedestrians.