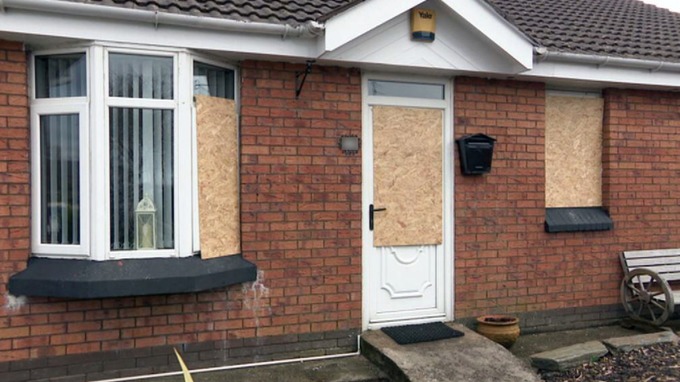 The boarded up windows on the disabled woman’s home in the Galliagh area of Derry. Picture by UTV

MINDLESS thugs who smashed windows at a Derry bungalow at the weekend have forced its vulnerable female occupant to flee in fear.

The devatstated family of the 28-year-old with Cerebral Palsy are heartbroken that their home in the Galliagh area was attacked at the weekend.

Thankfully none of them were at home when it happened.

The woman, who is in a wheelchair and has serious learning difficulties, is in respite care and will have to remain there for several weeks while repairs are carried out.

It means she’s been separated from the caring environment and the personal equipment she so desperately needs.

Windows were smashed and the glass in the front door was shattered by the force of the mindless attack.

A garden ornament was used to attack the house and was left behind in pieces.

It is understood police have made an arrest in connection with the attack.