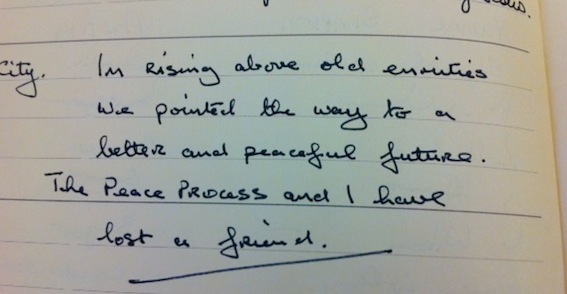 “PEACE PROCESS AND I HAVE LOST A FRIEND”: MARTIN MCGUINNESS SIGNS PAISLEY BOOK OF CONDOLENCE Martin McGuinness’s message in the book of condolence opened in Derry’s Guildhall to Ian Paisley.

Sinn Fein Deputy First Minister Martin McGuinness was one of the first people to sign a book of condolence opened in Derry’s Guildhall today for Ian Paisley.

The founder of the Democratic Unionist Party and Free Presbyterian Church died yesterday after a long illness. He was 88. In his message, Mr McGuinness wrote: “I’m rising above old enmities. We pointed the way to a better and peaceful future. The peace process, and I, have lost a friend.”

However, former Alliance Party leader John Cushnahan said that while he sympathised with the Paisley family, he was astonished at the “rewriting” of the firebrand’s political contribution.

“While I welcome the fact that he ultimately embraced power sharing, it was too little too late and should not be used to excuse the pain and suffering that he inflicted on the people of Northern Ireland for the majority of his political life.”