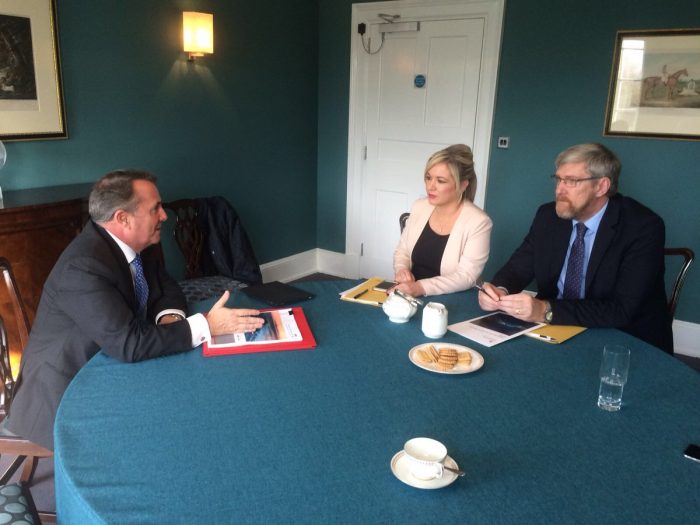 O’NEILL TELLS FOX: BREXIT WILL BE DISASTROUS FOR IRELAND

SINN Féin leader in the north Michelle O’Neill has met with the British government’s international trade secretary Liam Fox and told him that the Tory Brexit agenda will have disastrous consequences for Ireland, north and south.

Speaking after the meeting, Michelle O’Neill said: “”We made it clear to him in no uncertain terms that the Tory Brexit agenda would have disastrous consequences for the Good Friday Agreement and for Ireland, north and south, in terms of citizens rights, trade, our economy and the issue of the border.

“We told Liam Fox it is clear that he and his fellow Brexiteers in the Tory cabinet simply regard the north and its people as collateral damage in the Brexit process.

“It is clear the Tories are floundering over Brexit as their approach to these negotiations is being rejected by the EU.

!In fact the only people now supporting the Tories on Brexit appear to the DUP, regardless of the dire consequences for the people of the north.

“We also reminded him of the unique circumstances of the north of Ireland and reiterated that a unique solution is required.

!Securing special status for the north within the EU is not only a credible alternative to the reckless Brexit agenda of the Tories, but it is achievable.

“Support is growing for that position across Ireland and across Europe and Sinn Féin will continue to lobby to build further support for special status,” she added.

O’NEILL TELLS FOX: BREXIT WILL BE DISASTROUS FOR IRELAND was last modified: October 21st, 2017 by John

COVID-19: Infrastructure Minister not given details about...

Lessons need to be learned over abuse...