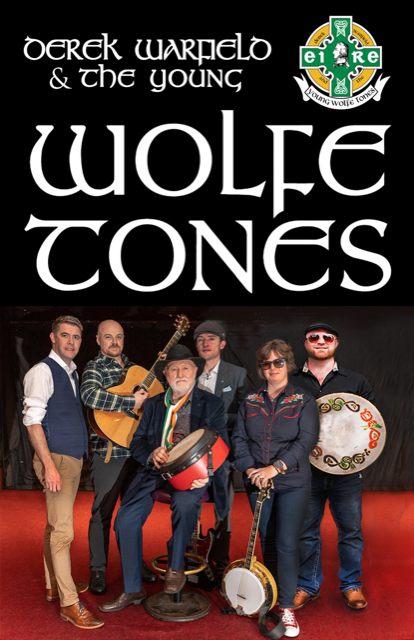 Derek Warfield, the original voice of the Wolfe Tones arrives in Derry for a Christmas Special alongside his Young Wolfe Tones band.

With a focus on presenting the traditions to a 21st century audience, the likeable front man weaves a magical journey through historical storytelling and of course singing the songs we all know and love, the songs that made him famous during his 40 plus year stint as front man and founder of the Wolfe Tones.

Derek Warfield’s lifelong passion for engaging people in the music and story of Ireland is also very present in the other band members “Communication with a live audience through music is what I believed to be of primary importance when I founded the Old Wolfe Tones in 1963”.

He added: “In performing with The Young Wolfe Tones, I continue to communicate with audiences while also passing on an important tradition to a new generation.

“But perhaps most importantly, it has been fun and enjoyable and every performance gets better.

“The experience has reinvigorated me and given the young players and singers the opportunity to display their skills and talents around the world.

“And I believe that I am passing on an ancient Irish bardic tradition worthy of preservation to a younger generation.”

Derek Warfield is revered as a singer, songwriter, historian and entertainer in all parts of the world where Irish roots have been put down.

The Wolfe Tones enjoyed phenomenal success with 13 best-selling albums, three number one hits, many television appearances and shows in esteemed venues such as New York’s Carnegie Hall and The Royal Albert Hall in London.

This show is 18+ and limited tickets are available online via Eventbrite (£15+BF) with Physical Tickets available from the Cosh and Bentley (£15 No BF).