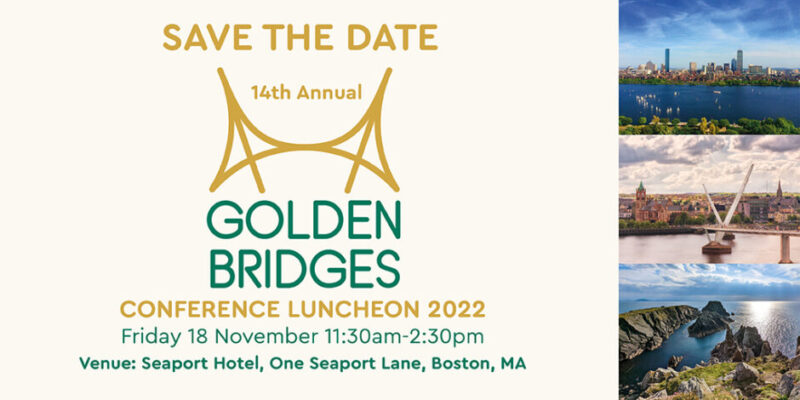 Delegates from the North West City region who are taking part in a trade delegation to the United States will be attending the annual transatlantic Golden Bridges Conference that takes place this Friday,18 November in Boston, United States.

The Golden Bridges Conference gives the global audience a unique insight into how those living and working in the border region of Derry, Strabane and Donegal are continuing to work in close collaboration to attract investment, create jobs and boost the economy during the current challenging economic times.

They are part of a delegation led by Derry City and Strabane District Council and Donegal County Council and a range of partners.

The Golden Bridges Conference is when political leaders, business, community representatives, tourism and education providers from Ireland North West and Boston join together to further bind their relationship.

This is the first year since 2019 that the hugely popular and influential transatlantic conference is being hosted physically after being held virtually for the previous two years.

The event will feature a range of speakers and delegates from the US, the Republic of Ireland and Northern Ireland, who will discuss themes of investment, innovation, tourism, culture and education.

Mayor of Derry City and Strabane District Council, Councillor Sandra Duffy, who didn’t travel to the US but who sent a message of support to those participating in the conference says it is important now than ever for the two Councils to re-engage with partners and businesses in the United States.

She said: “This year’s Golden Bridges will once again showcase the very best of the Northwest region to an audience of influential business and political leaders in the United States. Despite a number of unprecedented challenges, our region has continued to spearhead a very strong and unique strategic partnership.

“The Golden Bridges Conference is always a key date in our business diary, providing an opportunity to forge valuable business connections and augment the strong network of partnerships we have established over the years.

“We are delighted to get the opportunity to reconnect with our business, community and education partners to provide an update on the work we are doing and find out about new opportunities that exist for us.

The Mayor added that the Golden Bridges Conference provides the partnership with a huge opportunity to showcase these initiatives and profile the excellent work that is being done on the ground to profile our strong regional economic development offering to delegates across the Atlantic.

“The world has changed so much in the last years, the Irish diaspora, something that we cherish, has been disrupted and disjointed, but we are delighted to again gather for the Golden Bridges event and recognise the importance of maintaining our diaspora links and striving to develop new and fruitful partnerships.”