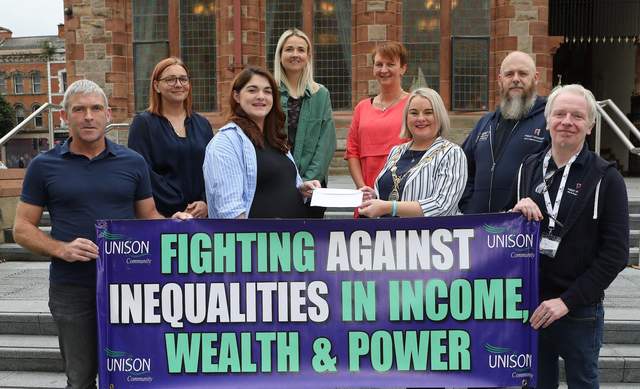 The Mayor of Derry City and Strabane District Council has chosen First Housing Aid and Support Services as her chosen charity for her term of office.

“Local people are right in the middle of a very challenging period in their lives, providing support for each other at this time will be crucial.

“UNISON Community Branch would therefore encourage as much support and community solidarity between each other as possible, including giving as much as you can towards Mayor’s chosen charity.”

The local charity is a voluntary sector, non-profit organisation which has been in operation since 1989, providing professional advice on housing to anyone who finds themselves in difficulties.

Throughout Mayor Duffy’s term, there will be several events and activities from which proceeds will be donated to First Housing Aid and Support Services.

Some of the plans include céilí dances in the Guildhall and Alley Theatre, a Mayor’s Charity Christmas evening, and a casino night, with more to be revealed.

There is also an online platform where people can donate directly to the Mayor’s charity.

Mayor Duffy said she was delighted to be working with First Housing Aid and Support Services.

“We are so fortunate within our District to have so many incredible charities working every day to support people going through a range of issues.

“It certainly wasn’t an easy choice to pick just one to work with during my mayoral term, but I am so pleased to be supporting First Housing Aid and Support Services.

“As someone who has worked in the homelessness sector for over 20 years, it’s an issue that I know all too well, and the work that this charity provides to so many people across the City and District is truly invaluable,” explained Mayor Duffy.

“Community fundraising is a massive factor in allowing them to continue the excellent work that they are doing, supporting people in addiction and housing distress.

“I’d appeal to everyone, if you can, to donate online or to come along to some of the fantastic events we will be hosting throughout my term as mayor. We have some really exciting plans and there will be something for everyone!”

Sinead McFadden, First Housing Aid and Support Services, added: “We are delighted to be selected by Mayor Duffy as the chosen charity for her term as First Citizen.

“It’s through fundraising and the generosity of others that we can continue to provide support and tackle the issue of homelessness and housing difficulties.

“Mayor Duffy is a passionate advocate for addressing this problem and supporting as many people as we possibly can.

“We want to thank the Mayor for her partnership this year and we look forward to working closely with her on the exciting plans for the months ahead.”