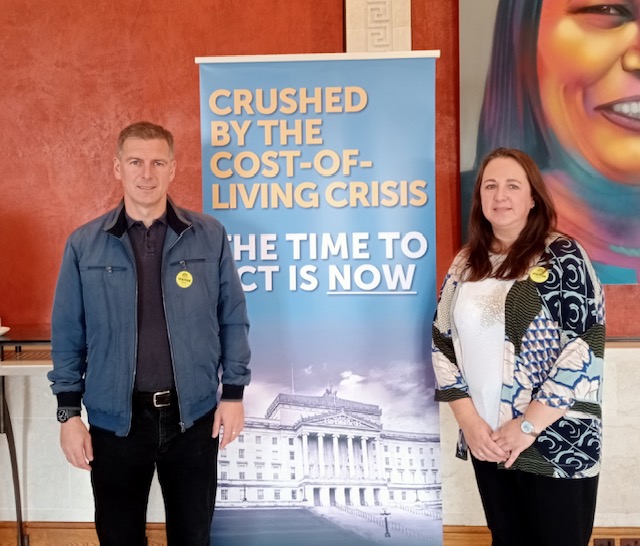 Today’s Crushed by the Cost-of-Living: The Time to Act is Now event held in Stormont’s Long Gallery brought together people from across the community and voluntary sector, academia and the wider community to call for the implementation of emergency measures to lessen the impact of the cost-of-living crisis for those with the lowest incomes.

The four emergency measures called for are suspension of debt deductions; restoration of the £20 Universal Credit uplift and its extension to everyone on benefits; mitigation to remove the two-child limit for universal credit and child tax credit; and a £500 hardship payment to carers.

Attending the Crushed by the Cost of Living Crisis event at Stormont, People Before Profit Councillor Shaun Harkin said,

“It’s simply disgraceful for no DUP MLAs or representatives to bother attending today’s Crushed by the Cost of Living Crisis event at Stormont.

“Hard-hitting presentations from a diverse range of speakers brought home the scale of the hardship catastrophe many in our communities are facing.

“The point of the gathering initiated by Dr. Ciara Fitzgerald was to impress on political representatives what can be done immediately to protect workers and the vulnerable in our communities.

“Everyone can see the Tories are doubling down on policies that will increase inequality.

“The DUP’s selfish and reckless Stormont boycott is only compounding the cost of living crisis here.

“Among the four emergency actions proposed today is for the Department for Communities to immediately suspend debt deductions.

“This action could help lots of people in receipt of Universal Credit and benefits. Crucially, it doesn’t require the Executive or the Assembly to be restored.

“If the Minister acted on this, it would have a hugely beneficial impact in Derry where the cost of living crisis is having a negatively disproportionate impact.

“However, no action has been taken yet. We believe there’s a gap between the committment of big parties to find ways to help people even with the situation at Stormont and what they’re actually doing.

“The Tories must be challenged and the DUP must be held to account, but the rest of the big parties can show much more urgency.

“We encourage people to get behind these emergency demands and to put feet on the streets in the coming weeks at cost of living protests.”