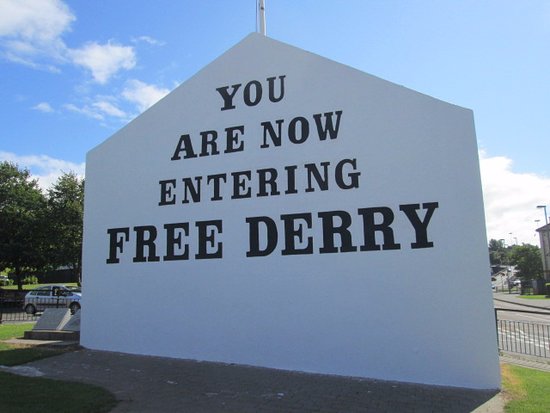 A veteran of the North’s civil rights movement has hit out at attempts by dissident republicans to associate themselves with Free Derry corner.

The gable wall in the Bogside with the slogan, ‘You are now entering Free Derry’, has been a fixture in the city for over 50 years.

Eamonn McCann, a former MLA and councillor with People Before Profit, had picked the words which he adapted from a slogan used by students in the Free Speech Movement in the University of California in Berkeley.

The sign in Derry was painted in 1969 following a heavy-handed police crackdown in the area.

Riots had broken out following an attack on civil rights protesters at Burntollet.

Throughout the years, the wall has been adapted to support various causes including a pink version for Foyle Pride.

Mr McCann said he had been saddened to see recent attempts by dissident republicans to associate themselves with the site by putting up signs.

Most recently, he said a memorial from the dissident republican group Saoradh had been bolted to the wall. It has since been removed.

“Some of the placards and slogans around Free Derry Wall misrepresent the message which the wall was intended to convey,” he said.

“The slogan ‘You Are Now Entering Free Derry’ was inscribed early in the morning of January 5, 1969, following the arrival in Derry of the civil rights march from Belfast now generally known as the ‘Burntollet March’.”

He added that the inspiration for the slogan had not been “a nationalist declaration” but an expression of the international dimension of the fight for civil rights.

“The same struggle continues across the world today. Nobody has a right to claim Free Derry Wall for his or her political group or ideology,” Mr McCann added.

He said that placards and advertisements that often surround the wall now should be removed as a matter of respect.

“Free Derry Wall should stand on its own. The green sward to the front of it should be left pristine, to highlight the civil rights message rather than confuse or obscure it.”

He said the recent placard from Saoradh group had commemorated the 2012 death of Alan Ryan, a Real IRA member who was allegedly murdered by a drugs gang.

“Alan Ryan’s death was as deplorable as any of the killings which litter our history,” he said.

“These include the death of journalist Lyra McKee in Creggan in April 2019 at the hand of a gunman associated with the (New IRA).”

He said the implication of a link between civil rights campaigners 50 years ago and paramilitary activity today “has no basis in history or in common sense”.

“The wall as it stands now insults Lyra’s memory. Down through the years, Free Derry Wall has been used to express solidarity with struggles for civil rights elsewhere, in Palestine, Yemen, Kurdistan, etc., as well as among women, the gay community, people of colour and transgender people.

“The wall doesn’t belong to or express the views of any paramilitary or political faction. It belongs to everybody, particularly to the people of Derry who have struggled and continue that struggle for civil rights for all.”