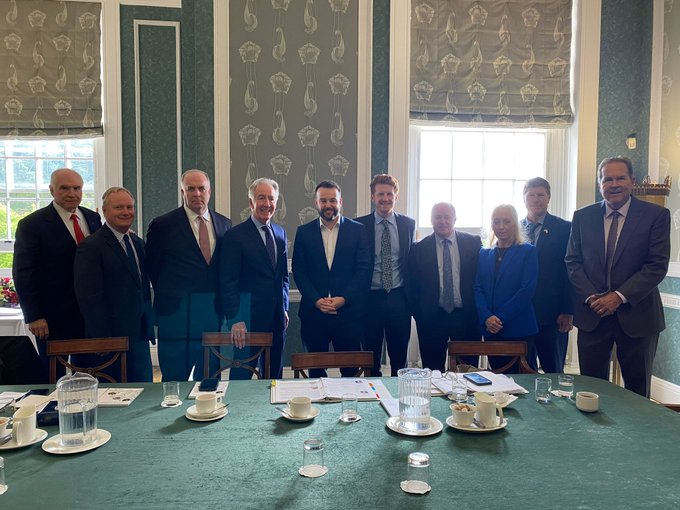 written by cassoscoop May 26, 2022
ShareTweet

Mr Eastwood outlined the impact that Brexit has had on people, businesses and communities across these islands and stressed the continued need for the Protocol as a bespoke solution that prevents the return of a land border on the island.

The SDLP Leader also stressed the urgent need for a return to the institutions of the Good Friday Agreement to deal with the impact of the hospital waiting list crisis, soaring energy costs and surging inflation.

Said the Foyle MP: “We have had a productive meeting with Congressman Richie Neale and the US delegation this afternoon.

“The United States remains a firm ally to the people of Ireland, the peace process and the institutions of the Good Friday Agreement which they were instrumental in securing.

“We are fortunate that some of the most high-ranking political leaders in the world take an active and engaged interest in the stability of our institutions.

“Rather than seeking offence or courting grievance, the DUP should be using the influence that affords all of us to build a better, more prosperous society for everyone.

“The politics of boycott has served no one.

“I acknowledge that unionism has a problem with the protocol. But the challenges we face are too important, they affect too many families, to allow government to be mothballed as part of a political strop.

“The restoration of the institutions should happen on Monday when the Assembly is recalled and MLAs should get back to work.

“We also discussed the British Government’s unacceptable departure from the legacy institutions agreed at Stormont House.

“The unilateral approach of this government to deeply sensitive issues in Northern Ireland is a matter of profound concern and we will continue to raise it with all those who have an interest and a stake in this place.”