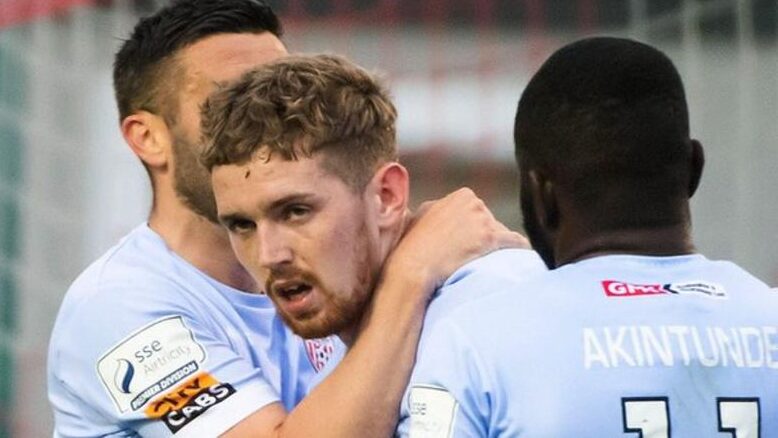 Derry City missed the chance to close the gap at the top of the SSE Airtricty League Premier Division table as Sligo Rovers snatched a 2-1 home win.

It was the third defeat in a row for the Candystripes who had hoped to get back to winning ways with their trip to Sligo.

Garry Buckley put Sligo in front on 20 minutes but Jamie McGonigle equalised for the Candystripes before half-time.

With leaders Shamrock Rovers losing in Drogheda, Derry looked set to cut the deficit at the top to six points.

The encounter was Ruaidhri Higgins’ 50th game in charge of the Candystripes as Rovers remain seven points clear despite their surprise 1-0 defeat.

Having been beaten at the Brandywell by Dundalk on Friday night, Derry were hoping to return to winning ways against a Sligo side that had parted company with manager Liam Buckley over the weekend but instead the Candystripes have now failed to record a victory in seven of their last nine games as well as being winless in five matches.

Sligo took the lead on 20 minutes as Adam McDonnell’s cross travelled to the back post and was steered home via Buckley’s chest.

Joe Thomson squandered a gilt-edged chance to equalise for Derry when he chose not to pass to Will Patching in a two-on-one situation and had the ball stolen away from his feet by Sligo keeper Ed McGinty.

At the other end, Derry keeper Brian Maher was equally alive to the situation as he gathered a fizzing effort from Karl O’Sullivan.

With 17 points, the Foylesiders have taken more points than anyone else away from home and they got back on level terms just before the break when a mishap in the Rovers backline afforded McGonigle an opportunity which he took full advantage of by shooting on the turn low past McGinty.

Rovers themselves were looking to arrest a five-game winless slide and they were certainly the more prominent in the second period with McDonnell and Aidan Keena both having chances to restore their lead.

McGonigle then beautifully controlled a searching through lob from Thomson but his finish lacked composure just moments after he had turned the ball the wrong side of the post from close range.

On 85 minutes, Sligo sent on highly-rated youngster Keogh and it proved a masterstroke by caretaker manager John Russell.

In added-on time, Keogh went on a mesmerising run only to be thwarted by Maher but did have the final say when he picked up the ball on the edge of the area and fired into the roof of the Derry net.

It is a difficult period for Higgins and his side with arguably the player of the season so far Cameron Dummigan limping down the tunnel in the first half.

The Candystripes will host lowly Finn Harps in the North West derby on Friday night with the hope of reviving their title bid.

Harps lost 1-0 to Dundalk on Monday night at Finn Park.