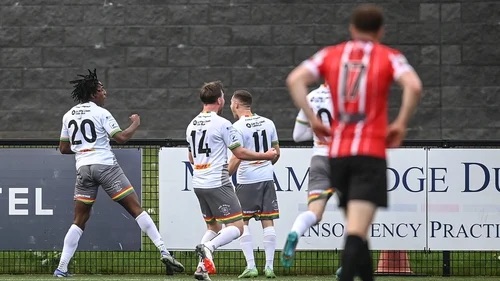 Derry City had to battle back to secure a hard earned point against Bohemians in front of a packed Ryan McBride Brandywell Stadium on Friday evening, May 6 (kick off 7.45pm).

But the Candy Stripes were fortunate after referee Adriano Reale gave them a controversial penalty and Will Patching scored from the penalty spot.

City had a good opportunity in the first minute, but Matty Smith’s well hit effort flew over James Talbot’s crossbar, while at the other end minutes later Brian Maher did well to turn over Ciaran Kelly’s powerful header.

The deadlock was broken on 15 minutes as Liam Burt’s lung bursting run from the edge of his own box after picking Brandon Kavanagh’s pocket, ended with the midfielder passing to Promise Omochere and the big striker took a touch inside the City box before side footing home past Maher.

Derry were awarded a penalty in somewhat fortunate circumstances as referee Adriano Reale felt that Conor Levingston had bundled Patrick McEleney to the ground while inside the box, after the protests were waived away, Patching side footed home the resulting spot-kick into Talbot’s bottom left hand corner.

Patching went close to netting his second on 55 minutes, but his 25-yard free-kick, which had Talbot beaten, sailed just past the left hand up-right.

On 67 minutes Jamie McGonigle showed his power as he easily got away from Bohs substitute Max Murphy, but when inside the box, the front man’s tame shot was saved by a diving Talbot.

The visitors missed a glorious chance to regain the lead on 78 minutes when after a flowing move Tyreke Wilson’s inch perfect cross found Omochere and with the goal at his mercy, the big front man’s poor header was gathered by Maher.