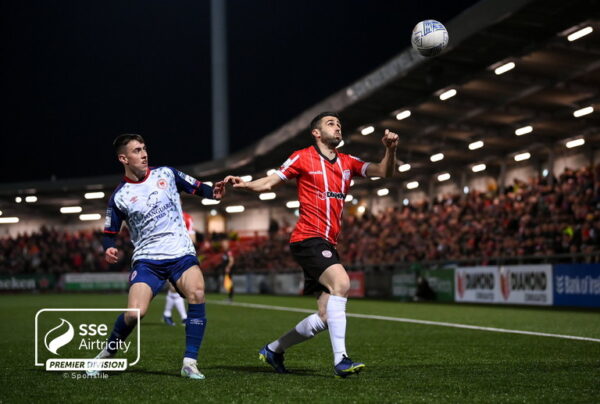 Derry City laid down a marker when they knocked in seven goals against UCD last week.

Still top of the table, having seen their six-point lead cut to one, City showed their goalscoring prowess having left Drogheda frustrated in their previous game.

They face a much tougher test in Inchicore against St Pat’s.

This should be another close match and represents a big opportunity for the Saints to close in on the top two.

Tim Clancy’s side lost out at the Brandywell last month to an injury time Will Patching goal.

Manager Ruaidhri Higgins is expecting an equally close game in Dublin this weekend.

“We won that match late on at the Brandywell but we created a whole host of chances throughout the 90 minutes as well,” he said.

“These are two sides who are likely to go at it- I know we’re not going there to sit in and look for a point and I’m sure they won’t either.

“Tim did a brilliant job at Drogheda and is doing likewise at Pats. He has some seriously good attacking options in his squad.

“People talk about Eoin Doyle and Chris Forrester and rightly so, but they also have the likes of Mark Doyle, Billy King, Darragh Burns, Ben McCormack and Tunde Owolabi.

“We have very good players of our own of course. Our lads always want to play on the front foot and it won’t be any different on Friday, so it should be an entertaining game.”

Jack Malone (hip flexor) is the only fresh injury concern for the visitors who will be hoping to bring the impetus of last weekend’s 7-1 drubbing of UCD with them to Richmond Park.

The game kicks off at 7.45 pm and will be streamed live on LOITV.