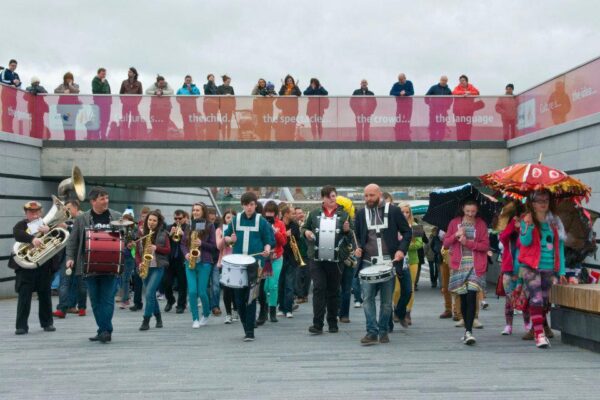 Derry community music jazz-education charity Second Line NI are making final preparations for the return of their now legendary Jazz Parade through the streets of the city this Saturday.

The tenth anniversary of the organisation and 8th annual Second Line will prove a particularly emotional afternoon for the musicians, dancers, hoppers, skippers and shufflers who will gather at Castle Street at midday for one of the highlights of the City of Derry Jazz and Big Band Festival 2022.

For the parade troop, their performance is all about spreading joy by connecting with the public and they are elated to be bringing the infectious spectacle back to a live audience.

“We are so ready to play and dance,” says Amanda Koser Gillespie, founder of Second Line NI.

“I’ve spoken to so many musicians and the core conversation that keeps coming up is just how disconnected we’ve felt over these past years and how hard it has been to reconnect to others.

“Online provides just enough, but you can’t hug through it, you can’t lean in face to face and play your heart out to the person in front of you and know that they are right there with you.

“What I love about Derry people is that they are always up for the craic and so are we.

“I’ve watched people spontaneously dance their way alongside us and then continue on with the rest of their day.

“When you leave a moment like that you take the feeling it gave you with you and that memory acts like an open invitation to come back and join in each time.

“I think what makes this so special is that everyone who wants to, has a place to join in, any instrument is welcome, any age is welcome.

“We don’t ask that people come and be a representative of something other than who they are and what they want people to see.”

The organisation was founded ten years ago to explore shared public spaces with shared music after an impromptu meeting between Amanda and acclaimed JayDee Brass Band sousaphone player Patrick Witberg.

“I saw Patrick walking past the window where I was working at the time,” she explained.

“They were playing the Jazz Festival for the first time and as a tuba player, when you see another tuba player you want to meet them.

“I ran out of the building and down the street after them screaming to stop the sousaphone player.

“After a chat, I met up with the band a few times over those days and we talked about New Orleans styled street jazz.

“We all have a very special place in our hearts for that specific kind of music and its raw edgy quality of playing and the use of improvisation.

“I watched how people just followed them no matter where they went, they were a magnet for magic and happiness – even if they were just playing for 10 minutes.

“I had only been living in Derry for just a couple of years and was in the process of getting into the gigging scene here.

“Jazz holds a very strong place in my life and I love the connection when meeting people who share that passion, whether listening or playing.

“I was introduced to Robert Goodman and we started putting together a group of musicians of all ages who were keen on having fun.

“We wanted then, as much as now, to really explore shared public spaces with shared music and for us, that’s jazz.

“Now, entire families are coming out to play and celebrate and that is beautiful!

“The parade is based on the New Orleans Jazz Funeral model where mourners are joined on their procession to the cemetery by a brass band that plays music that starts off heavy and sad but soon turns celebratory.

“This year we have a lot to celebrate and a lot to remember,” Amanda added.

“The second line in a Jazz Funeral marks the moment where you celebrate life, living it, being in it and you celebrate it with those around you.

“You celebrate the lives of those no longer there to dance with you and this year we want to tap into the heart of second lining because we have a lot to celebrate.

“Our first year, when the second line was finished, I thought wow, that’s a lot of work and now we did it, what do we do next?

“Will this take off and will people want more?

“I realised at the end I had to run back to the starting point because all of the kids left their instrument cases in the building, the crowd has dispersed and I was packing up the car with my tuba and bass drum and chatting to the JayDee guys and Silvestre, the snare drummer, stopped the conversation and said ‘listen!’.

“The kids of the second line collected together and played the pieces the entire way back to where we started.

“In doing this, it called most of the crowd back and they followed the kids back up to Castle Street and made their own impromptu second line.

“We watched this happen and I couldn’t be prouder, they simply did it and they brought the joy back and people responded.

“It was then that we realised second lining had a home here.”

It will pass through Castle Street, Waterloo Street, Strand Road, right on Great James Street – past the City Hotel around the roundabout, swinging by the Post Office on Guildhall Street before making a left and end beside Guildhall Square.

For a full listing of the 2022 Jazz Festival visit: cityofderryjazzfestival.com