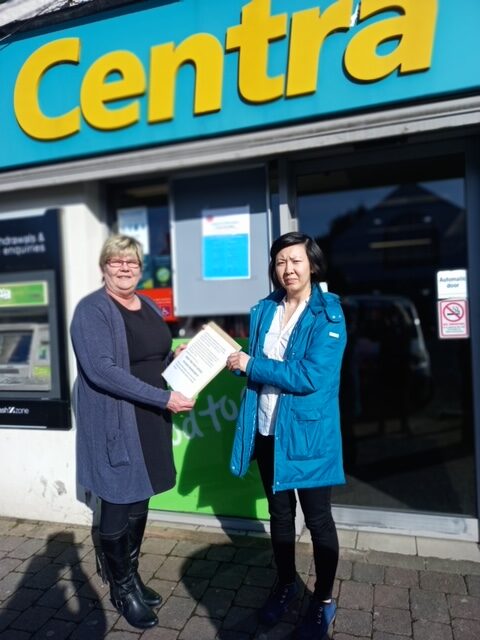 SDLP Councillor Angela Dobbins says she is delighted with the outcome of her campaign to save Culmore Post Office.

Cllr Dobbins, seen here presenting a petition to the area representative for Post Office, was today given assurances that the facility would be remaining in Culmore.

“I am thrilled with this news,” said Cllr Dobbins.

“As a community we were dismayed that Post Office were closing its Culmore branch 1st March and that they were even considering not reinstating their services within the Culmore area.

“After setting up an online and physical petition calling for support that Post Office and its services remain within our community I was delighted to have been given assurances today that it is to remain.

“I wish to thank everyone who contributed to the petition, we collected almost 1000 signatures in such a short period of time.

“The representative told me that the advert for a postmaster/mistress had received a number of interested parties and that it was to remain within the community given this interest.

“She explained that there was a due process that prospective candidates had to embark upon and this process should be completed in a few weeks.

“At present there is no indication as to where the post office is to be located but this will depend on the successful applicant.”

Cllr Dobbins concluded by saying that she is aware of interested parties regarding the former Centra store and is hopeful it will not be vacant for too long.