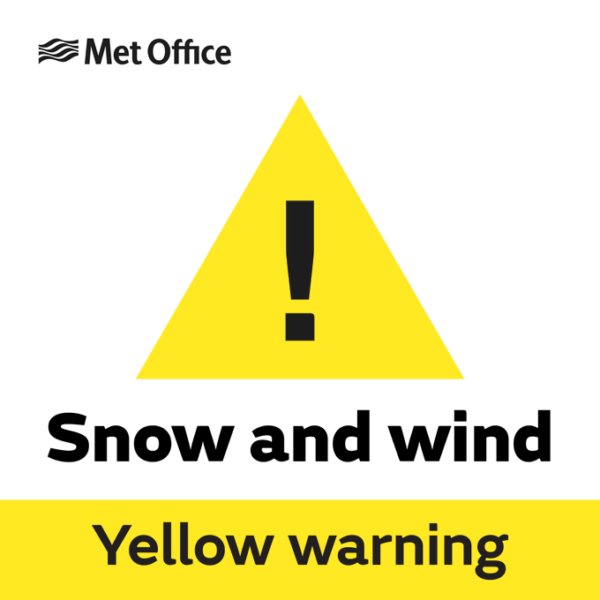 A yellow Met Office warning for wind and “frequent heavy snow showers” has been issued across large parts of the North of Ireland.

The warning, which covers counties Derry, Antrim, Fermanagh and Tyrone, comes into force at 1pm on Wednesday, February 23, and is set to last until 3pm on Thursday, February 24

The Met Office said snow could build up even at lower areas of the province, with very gusty winds and a small chance of frequent lightning affecting some places.

The latest warning means the North of Ireland is yet again set to be bracing the elements on the back of Storm Franklin on Sunday and Monday which caused severe flooding in some parts of the country.

Forecasters said the wind and snow will bring potential disruption to the transport network, while power cuts and disruption may occur on other services, such as mobile phone coverage.

A Met Office spokesperson said: “Temperatures across Scotland and Northern Ireland are expected to drop sharply following a squally band of rain on Wednesday, with frequent heavy and blustery snow showers arriving from the Atlantic.

“Away from immediate west-facing coasts, 2-5 cm, and in places 7-10 cm of snow is likely to build up even at low levels, whereas on higher ground some places could see 20-30 cm building up by Thursday morning.

“The showers will be accompanied by strong, blustery winds, with gusts of 50-60 mph possible, and a small chance of 70 mph on coasts.

“Blizzard conditions are likely over higher ground. There is a very small chance that some of the showers could be accompanied by frequent lightning, which may could impact power supplies.

“Snow showers are increasingly likely to turn back to rain and sleet at low levels later Thursday morning and early afternoon, although remaining as snow above 200-300m.”