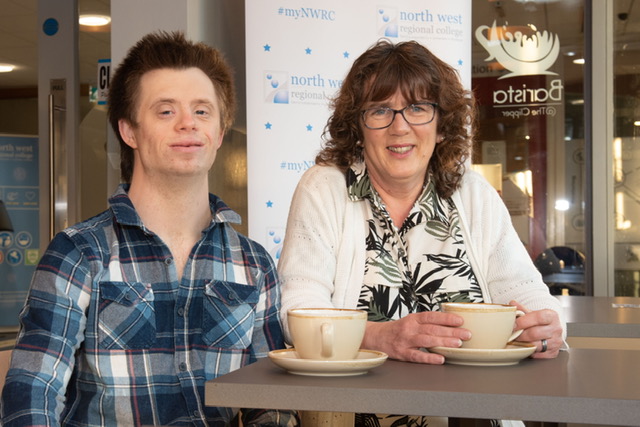 Angela Thompson, Lecturer in Health and Social Care at NWRC who was awarded an MBE in the New Year Honours List, pictured with her son Benjamin. (Picture Martin McKeown).

A lecturer at North West Regional College (NWRC) who was awarded an MBE in the 2022 New Year Honours list says she’s shocked but deeply honoured.

Angela Thompson from Derry, who lectures in Health and Social Care, was given an MBE for her Voluntary Service in Northern Ireland, particularly during the Covid-19 Pandemic.

As well as lecturing at NWRC Strabane, Angela is a volunteer with the Foyle Down Syndrome Trust (FDST) where she is a director and chairperson, and with St John Ambulance where she is a former Area Manager and current Regional Infection Prevention and Control Lead for Northern Ireland.

She is a former nurse with a wealth of experience in infection control and a former researcher in the field of learning disabilities.

Angela first became involved with FDST in 1999 following the birth of her son Benjamin who has Down Syndrome.

Since then, she has worked alongside the team to empower children and young people with Down syndrome to lead full, meaningful, and productive lives and to help them reach their full potential.

When the first pandemic lockdown began in March 2020, Angela’s expertise in infection control that she acquired while nursing became invaluable to the charity.

She explained: “At the beginning, it was all about educating families and our young people, it was a learning experience for everyone, and we had to find a way to explain lockdown to everyone.

“We knew immediately that we had to ensure that our young people still had access to all of the services they were using such as Jo Jingles, Gardening, Catering, Socialising, and Yoga.

“We moved quickly to ensure all these activities were available online.

“As well and the physical benefits of all these activities we wanted to ensure that mental health needs were also looked after.

“It was all about learning through fun and everyone responded to it.

“When it came to vaccinations, we wanted to ensure everyone was looked after and got all the information they needed, and we ran our own vaccination clinics at the FDST building for all the young adults with DS.

“When restrictions began to ease and the young people were allowed to attend activities in the FDST building we used painted feet on the floors of the building, made posters, and implemented a one-way system, everything we could to support our young people, and to help them understand that it was ok to be outside again.

“Everyone responded really well, and it was a pleasure to teach the young people and be a part of it.”

During the pandemic and lock down Angela’s role was to check that all volunteers had the correct PPE and access to it when completing duties for SJA, helping with the NIAS.

She was responsible for auditing all the SJA ambulances and garages in NI for cleanliness in order to prevent any spread of infection.

With her lecturing at NWRC and voluntary work, Angela is a busy woman, but she says she wouldn’t have it any other way.

“It’s extremely rewarding,” she said. “I love teaching at NWRC and my son Benjamin is a student there studying catering.

Dr. Catherine O’Mullan Head of Curriculum and Operations at NWRC, congratulated Angela on her MBE.

She said: “On behalf of the staff and students I would like to say how proud we are of Angela, for the commitment she gives every day to our students, and the many hours she gives to the voluntary sector, making a huge difference to the community. 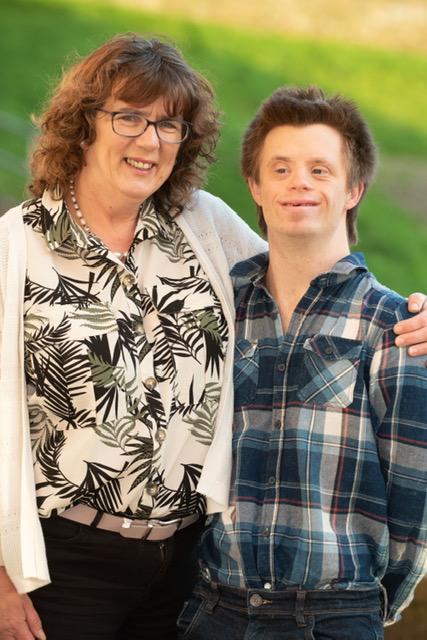 “Angela is an inspiration to us all and a role model to our young people. I can think of no one who deserves this recognition more.”

Christopher Cooper, Manager from Foyle Down Syndrome Trust said: “Our congratulations and thanks to Angela.

“This is a thoroughly deserved accolade for Angela’s incredible and continued dedication, passion, and commitment as a Director of Foyle Down Syndrome Trust for the past 22 years.”

Richard Doherty, President of St John Ambulance N. Ireland said: “This is a wonderful honour for Angela who has given more than half a century of service to our charity.

“People like Angela make a huge difference to organisations like ours and we are delighted to see her work recognised.”