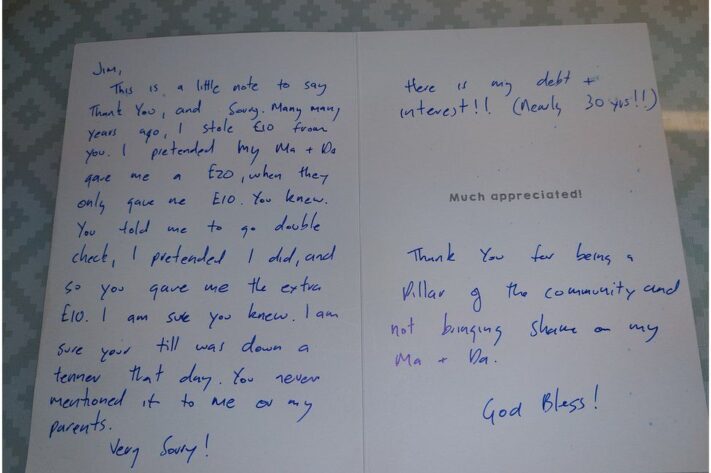 A DERRY shop owner has received a card from a thief apologising their conduct 30 years on.

The anonymous person took time out to pen the car to ease his or her conscience for a misdemeanour committed in the city three decades ago.

The person sent a card to a shop owner in the city’s Carnhill area to apologise for stealing £10 from him “many years ago”.

Jim Barr was surprised by the message, which thanked him for “not bringing shame on my ma and da” by exposing the crime.

The culprit suspected Mr Barr knew he was being duped, saying: “I’m sure you knew. I’m sure your till was down a tenner that day.”

But the Derry man told the BBC he has no recollection of it.

“I haven’t a clue who it was, but a friend of mine who’s a teacher pointed out that it’s probably a fella [boy] as a girl in Derry would tend to say ‘mammy and daddy’ rather than ma and da.

He explained that in the Nineties, pupils from the nearby St Columb’s College were the most regular customers in the mornings.

“There was just one shop and 250 odd houses here, so we would have had a lot of boys calling in for sweets and crisps before school,” he said.

“I don’t need to know who it was because it’s not important, but what I would love is for the person to meet up with me on the quiet so we could go down memory lane and have a laugh about it and say nothing to anyone.”

The letter continued: “I pretended my ma and da gave me a £20 when they only gave me £10. You knew. You told me to double check. I pretended I did and so you gave me the extra £10.”

He or she then thanked him for not mentioning it to their parents and for being “a pillar of the community”.

The message ended with the words: “God bless!”

Remarking on this, Mr Barr said: “This is a person of faith and this must have been playing on his conscience for years.

“He gave me back £40, that’s the tenner and a pound of interest for every year.”

In a week when questions have been asked about the integrity of those in Number 10 Downing Street, Mr Barr suggested that most people are innately honest.

“I think most people are good deep down,” said Mr Barr.

“You get the odd bad apple, but the way I look at it is that person might have had a hard life and it’s probably just the way they were brought up.”