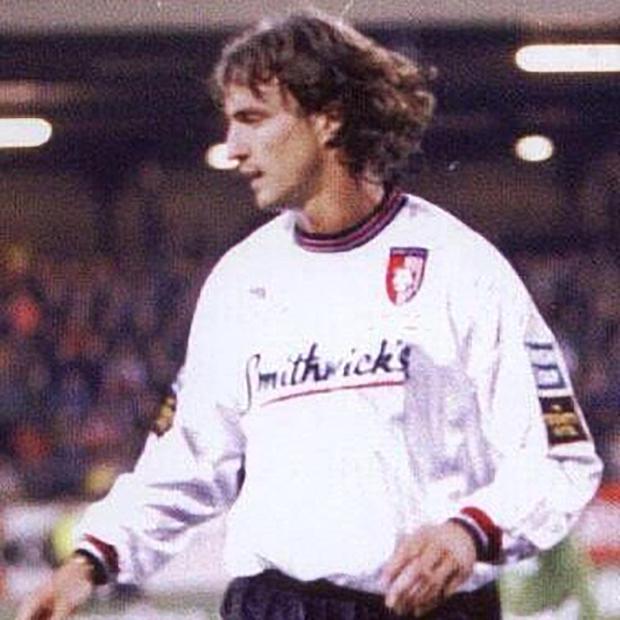 DERRY City FC has thrown its support behind former Newcastle United footballer David Ginola to win this year’s I’m A Celebrity… Get Me Out Of Here!

Their support comes after he once pulled on the club’s famous shirt in a 1998 charity game following the Omagh bomb atrocity.

The 54-year-old quickly became an I’m A Celeb fan favourite in Sunday’s opening episode as he came out with some ‘filthy’ remarks in front of Dame Arlene Phillips in their bushtucker trial.

I’m A Celeb returned to Gwrych Castle near Abergele in north Wales for a second year due to ongoing coronavirus travel restrictions, preventing filming at its usual location in the Australian jungle.

Former Tottenham Hotspur and France international Ginola lined out for a Derry City select team at the Brandywell in a special game for the victims of the Omagh bombing.

Sharing a photo of Ginola in a white Derry City shirt on its Facebook page, the club said: “If you’re looking for a tenuous link to this year’s I’m A Celeb, we’re backing David Ginola.

“The Frenchman lined out for City in a charity game for the Omagh Trust back in ’98.”

Ginola, who was plying his trade for Spurs that season after a £2.5m switch from the Toon, wowed the 10,000 capacity crowd at the Brandywell and helped his side claw back a 2-0 deficit.

The then Republic of Ireland manager Mick McCarthy was taking charge of the opposition, who raced into a 2-0 lead.

But it was that man Ginola who scored a cheeky penalty to reduce the arrears before his deep cross allowed Darren Kelly to score the easiest of goals from close range.

The Derry City side went 4-2 in front and the game was rounded off when Ginola’s corner was met by Omagh Town’s Micky Donnelly, who put it into the net.

Ginola said he had no hesitation in accepting the invitation from Derry City to play in the Omagh Trust Fund fixture, which raised more than £75,000.

“I’m just here to play a game of football with other players for the families of this terrible tragedy,” he said. “It is just part of our responsibilities in terms of being a professional footballer. We are not selfish idiots.”

Derry City’s social media administrator Ethan Barr, who watched Sunday’s I’m a Celeb, said people tend to reach for the smallest connections to their town when a huge show is on television.

“When he was here, the fans absolutely loved him and there’s the famous story where he sprinted off the pitch in the second half before he got mobbed,” said Ethan.

Ethan felt Ginola’s appearance at the charity game was a “big draw” and the fact he wore a Derry City shirt gave the club’s fans a bit of pride.

“People say he was one of the best players to put on a Derry jersey and the fact he scored the wee fancy penalty,” he said.

Reflecting on Sunday’s episode, Ethan added: “He was a likeable character and my mum still fancies him!

“He’s one of the more well liked people in I’m a Celeb with his temperament but you can also see the sportsman in him. He wants to compete.”

Ginola is now the favourite to win I’m A Celeb after bookmakers gave him odds of 7/2.