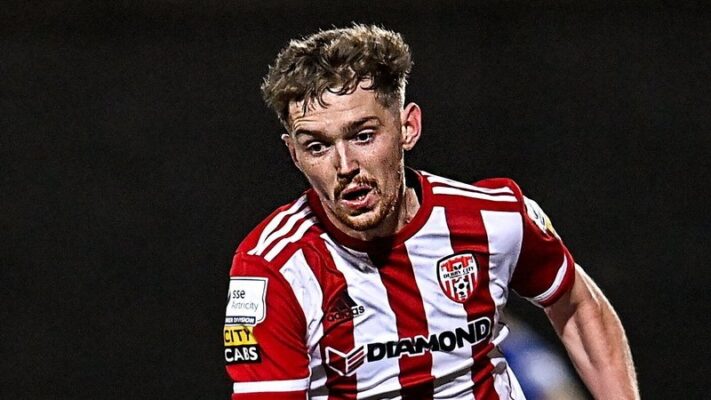 The former Crusaders frontman had two goal of the season contenders last night (kick off 7.45 pm), both wonder strikes that were worthy of settling any contest.

It means the Candystripes keep pace with Bohemians in the race for fourth place, which will be enough for a European spot if St Pat’s win the FAI Cup final.

Derry came out of the blocks fast and they deservedly took the lead in sublime fashion as Joe Thomson broke into the Rovers box before his cushioned lay-off found McGonigle and the striker’s left footed volley flew past Richard Brush, into the bottom right-hand corner.

More good play by the home side resulted in them always looking a threat to adding a second on the counter attack with McGonigle and Thomson both going close in quick succession.

Rovers missed a great chance to equalise on 32 minutes as Mark Byrne’s lung-busting run down the right ended with his well-hit drive being well saved by diving City keeper Nathan Gartside.

Derry had Gartside to thank for staying in front as the shot-stopper did well to keep out Garry Buckley’s close range header.

Right on the stroke of half-time Derry missed a great chance to double their lead when McGonigle beat the offside trap but Banks got back to clear off the line after the striker had clipped the ball over Brush.

Just after the hour mark Derry went close twice in quick succession to doubling their lead firstly, McGonigle’s shot was cleared off the line by Buckley and, from Fitzgerald’s resulting corner Brush somehow tipped over Eoin Toal’s close range effort.

McGonigle scored another wonder goal on 75 minutes when his sublime volley from the edge of the box flew past Brush and into the top corner, after the unfortunate Buckley had blocked Fitzgerald’s cross into the striker’s path.

City’s last match is against Dundalk at Oriel Park next Friday, November 19 (kick off 7.45 pm).