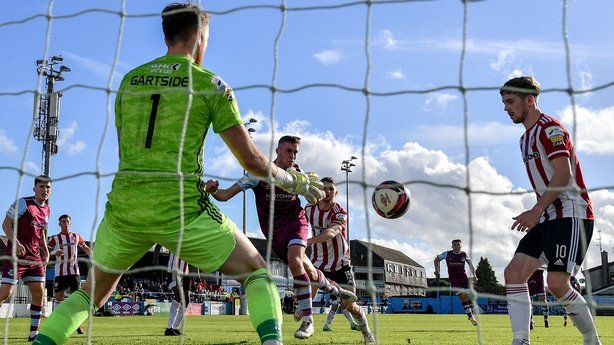 TEENAGER Killian Phillips was Drogheda United’s matchwinner as Tim Clancy’s side put themselves back into European contention with victory over a lacklustre Derry City at Head In the Game Park.

The midfielder’s 39th-minute header, after Mark Doyle had hit the upright, proved enough as Tim Clancy’s team picked up their first win over the Candystripes in six years.

The defeat leaves Derry City still in fourth place and with games fastly running out so are their hopes of clinching European football next season.

On a sunny Sunday afternoon, the win may change the conversation around the end of the season for United.

While Derry pushed late on, it was the hosts who went closest to scoring the game’s second. Sub Jordan Adeyemo was denied a breakaway goal in injury-time.

United were unchanged from their win over Longford nine days ago while with Danny Lafferty suspended, Ruaidhri Higgins reintroduced James Akintunde into his line-up.

The visitors had the better of the opening half in terms of chances and possession. Drogheda, however, proved a resolute obstacle as Derry chased an opening goal.

Gary Deegan was well placed to block Ronan Boyce’s header, which was minutes before Drogheda’s midfield enforcer was booked by referee Paul McLaughlin for a late challenge on Evan McLaughlin.

McLaughlin took charge of the crunch league clash, making his first return to Boyneside since Derry’s penalty shootout victory over Drogheda in the FAI Cup in July. Teenager McLaughlin scored the decisive penalty that afternoon.

The Donegal official controversially dismissed Dane Massey, James Brown and Clancy that day too as the Candystripes progressed.

There was no much drama this time around but Drogheda’s win lifts them seven points clear of Waterford – albeit Marc Bircham’s men have played one fewer game – and just four off Sligo Rovers in third.

European football, as unlikely as it may be, is not beyond the Drogs just yet.

To be in that particular mix with just a handful of games left in the season is testament to their performance across the season in their first year back in the top flight.

Phillips has been the breakout star of United’s campaign.

His goal against Derry was his second of the season and comes hot on the heels of his call-up to Jim Crawford’s Republic of Ireland Under 21 squad, alongside clubmate David Odumosu.

Akintunde went close again when he collected Ciaran Coll’s cross and turned Phillips before he sent a wild shot high and wide.

Odumosu then failed to claim a long ball forward under pressure from Jamie McGonigle. The loose ball spilled to McLaughlin but his shot was cleared by Daniel O’Reilly.

The opening goal arrived six minutes before the interval. Boyce was carded for fouling Phillips and the free-kick from deep was cleared for a corner. Darragh Markey’s delivery was met by Doyle, whose header hit the upright but Phillips stooped for the rebound.

Joe Thomson drilled a free-kick just wide in response. Derry were unbeaten in their previous nine meetings with Drogheda but restricted to half-chances only, failing to test the home goalkeeper.

McGonigle had City’s two clearest opportunities after the break but neither flustered Odumosu.

Next up for Derry is a home league game against Bohemians this Friday, October 29 (kick off 7.45 pm).