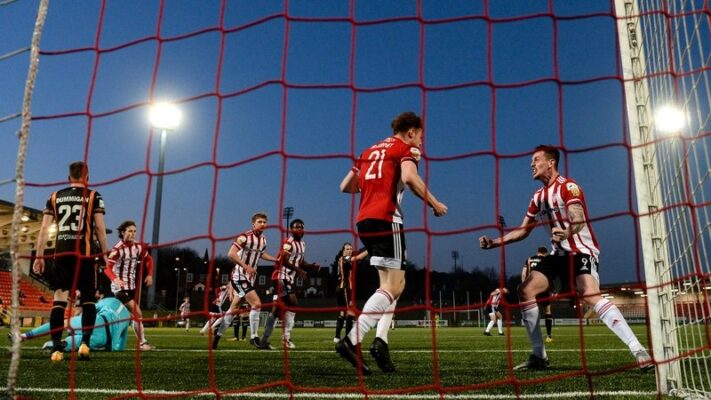 Derry and Bohs clash as European race hots up

Cameron McJannett misses out for Derry through suspension

Bohemians and Derry City meet in the SSE Airtricity League Premier Division tonight at Dalymount Park (kick off 7.45 pm) as the race for Europe heats up ahead of the beginning of the final round of matches of the season.

Both sides are just inside the top half of the table ahead of this game in hand, with Derry in fourth spot and the Bohs a point behind.

The last quarter of the season begins this Friday night.

The Gypsies know they have the FAI Cup to fall back on if they are unable to book it through the league, after a routine victory over Maynooth University Town on Friday booked a semi-final spot.

As they await their fate in the draw for the last four, these back games with Derry, Dundalk (27 September) and Shamrock Rovers (TBC) will have a big say on whether they can climb the table and secure a top-three finish.

Bohemians average over two goals a game at home, while only Shamrock Rovers have a better record in the last eight games in the league than the Candystripes.

Derry edged a 2-1 win earlier in the season at Dalymount as Cameron McJannett notched a late brace in one of the first wins under Ruaidhri Higgins, and there was injury-time drama in the next fixture as Marc Walsh earned them a point.

It sets up tonight’s fixture nicely.

McJannett is one of three players suspended for Derry, along with Joe Thomson and Danny Lafferty.

Derry boss Higgins is confident his side can be in the mix for the top four:

He said: “It’s not ideal to lose three players who have been in great form for us but there are quality players in the squad ready to come in.”

“This will be a really tough game – Bohs are in great form and showed both in Europe and in the big games domestically this season just how good a side they are.

“They have some of the best young players in the country in their squad but we will still be going there looking for three points.

“Dalymount Park has been a decent venue for Derry City down through the years.

“We’ve already won there this season and while Bohs have improved since then, so have we.”

Ali Coote and Liam Burt are doubtful for Bohs, while Promise Omochere and Stephen Mallon are set to miss out.