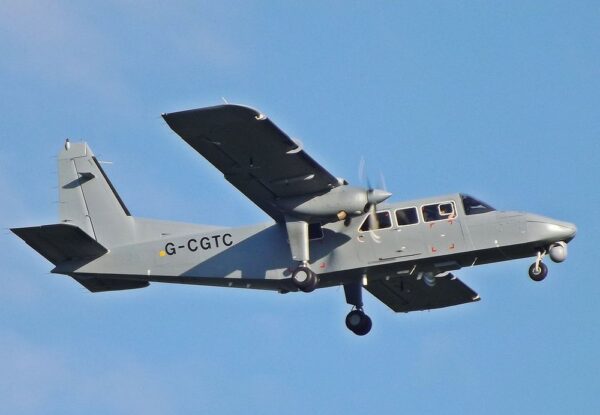 A PSNI spotter plane that had to make an emergency landing at City of Derry Airport last year suffered double engine failure in freezing conditions.

An investigation into the incident involving the BN2T-4S Islander on November 12, 2020 found the engine anti-icing system was not on before entry into cloud with an outside air temperature less than 5C.

The Air Accidents Investigation Branch (AAIB) further found the pilot’s limited recent experience in icing conditions was likely to have been a contributory factor.

It added that “stress and fatigue” over employment concerns could have affected his performance.

The plane had been scrambled due to a security alert in Limavady. It took off from Aldergrove with a pilot and two observers.

The aircraft entered cloud, and as it did so the pilot recalled selecting the engine anti-icing on.

After around five minutes the pilot noticed torque indications for both propellers were reducing, with a related decrease in airspeed. He increased power, but both dropped again.

He then noticed that the turbine gas temperature on both engines had reached the limit of 927C. At this point the pilot reduced power to keep the temperature within limits.

He informed the crew there was a technical issue and he intended to return to base at RAF Aldergrove.

During a subsequent left turn the right engine failed.

The pilot said he then became concerned the second engine would also fail.

Just then it “flamed out”.

The pilot decided his only option was to try to glide to City of Derry Airport at Eglinton, which was nearer.

He completed engine shutdown and declared ‘Mayday’ to Aldergrove and asked for a heading for City of Derry.

He was aware it was closed so asked Aldergrove if it could get the airport’s lighting switched on, but it couldn’t.

The pilot had an iPad with a mapping application but this was not working. The observers also had iPads with maps and one of them went to the cockpit to help.

During the descent the pilot was able to restart both engines over Lough Foyle.

Using the iPad map, and with the observer assisting, he flew towards City of Derry. By now Aldergrove had lost radar contact.

The pilot recalled that the wet runway surface became visible in reflected lighting at 900ft.

Too low for a safe landing, he circled and made a powered landing. All on board were uninjured.

The AAIB revealed the pilot had been due to step down from flying on his 60th birthday, two months after the incident and as required by regulations.

He had made repeated attempts to seek guidance on what employment would be available after that, but there had been no job offers.

“The pilot stated during interview that the uncertainty over his future, and other personal stressors, had contributed to him feeling worried and had caused his sleep pattern to be badly disrupted,” the report said.

“He stated that the stress he was experiencing had the effect of making him feel angry more easily, but he had not thought it would affect his flying performance and had not considered seeking any kind of emotional or psychological support.

“The operator’s HR department stated that staff shortages and public health restrictions in place at the time had hampered their efforts.

“The delay meant that the pilot had been uncertain about his future for about a year at the time of the incident, and he stated that the stress he was experiencing disrupted his sleep.

“In the days leading up to the event the pilot stated that he had suffered a period of disturbed and restricted sleep, which he considered arose from various stressors, primarily his contractual situation and the lack of a resolution to it.

“On the night before the incident he had lost approximately three hours sleep and his sleep quality on the preceding three nights was poor.”

The AAIB concluded the plane had suffered a double engine failure at around 7,000ft, likely due to intake icing.

“After an initial glide descent both engines were successfully restarted and the aircraft made a powered landing at Eglinton,” investigators said.

“It is likely the engine anti-icing system was not selected on before entry into cloud with an outside air temperature less than 5C.

“A build-up of ice in the engine ducts probably caused the engine symptoms noted by the pilot and the subsequent rollbacks and flameouts.

“The investigation found that the pilot’s limited recent experience in icing conditions was likely to have been a contributory factor, and that circumstances causing stress and fatigue could have affected his performance.

“Both engines were relit during the descent and a safe landing was made at Eglinton, although the airport was closed.

“The operator has taken safety action related to winter operations, use of anti-icing systems and pilot wellbeing.”