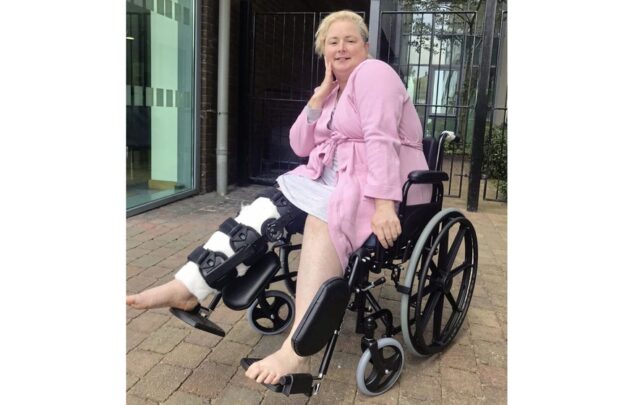 DERRY Girls actress Siobhán McSweeney has been released from hospital in Cork after sustaining an injury ahead of the launch of her TV show in which she toured the north on a bicycle.

The star, who plays acerbic nun Sister Michael in the Channel 4 comedy series set in Derry during the 1990s, tweeted an image of herself yesterday in a wheelchair with her leg in plaster, after spending time at Cork University Hospital.

Siobhán, who grew up in the Co Cork village of Aherla, sustained an injury last month as her travel show, Exploring Northern Ireland, was about to be screened on More4.

The four-part series saw the actress tour the north’s popular destinations with a focus on mountains, lakes, forests and the coastline, with each episode exploring a different landscape.

Riding her electric bike, the 41-year-old visited Belfast, the Mourne Mountain and of course Derry where her fictional alter ego Sister Michael is principal of Our Lady Immaculate College in the hit show that has propelled her to fame in the UK.

Thanking staff and fellow patients at the hospital, she joked of leaving the facility as a “jailbreak”, and wrote: “I’ve had the very best of care, from laughing with the cleaners, to crying with the deeply capable and caring nurses, the amazing women I met on the ward with hips and no hips and chipped ankles and shoulders and very broken legs.

“The cheer and the craic was awesome. The care assistants who cared so well. It’s a hard thing to care. And I was surrounded by experts. I’m beyond lucky.”

Siobhán, who in recent years has also starred in Irish comedy horror movie Extra Ordinary, and British sitcom Porters, did not reveal the cause of her injury, but wrote of her “clumsy accident”.