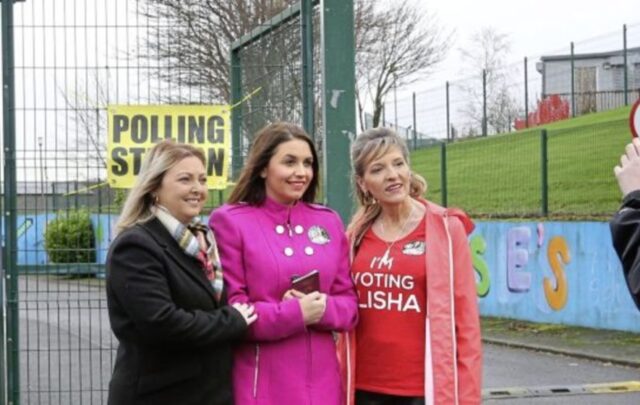 SINN Féin Uachtarán Mary Lou McDonald has today paid tribute to Foyle MLAs Karen Mullan and Martina Anderson who are stepping down from the Assembly within the next month and taking on new roles for the party at a national and regional level.

Both MLAs were urged to step down following an internal review after the party’s disastrous results in the Westminster and local council elections.

The internal review also called for a shake up of the Derry Comhairle Ceantair with the entire leadership asked to step aside in a bid to revitalise Sinn Fein’s fortunes in the city.

Elisha McCallion lost the Foyle MP seat to SDLP leader Colum Eastwood who wrestled it back with a landside 17,000 plus votes in 2019.

And in the local elections that spring, the party lost five seats, wiping out its dominance on Derry and Strabane District Council and putting it neck-and-neck with the SDLP, with 11 seats each.

Elections to the Stormont Assembly are due to held by next May.

Said Mary Lou McDonald: “Martina Anderson and Karen Mullan recently confirmed that they would not be contesting the next Assembly elections in 2022.

“Karen and Martina have now told me it is their intention to step away from the Assembly before the beginning of the new term, which starts on September 13th.

“They will continue to play a leading role in the development of the party nationally and at regional level in the north west.

“Martina Anderson will be taking on a new international role for the party in Europe promoting the case for Irish Unity.

“Martina will draw off her vast experience as a former Executive minister, and MEP, where she helped lead the fight against Brexit to ensure that the all-island economy and Good Friday Agreement would be protected and there would be no hardening of the border.

“Karen Mullan, who has a long track record in community development, in education and health as well as years of experience as an elected representative, will be taking on a new regional role in the north west strengthening cross-border co-ordination between the party’s TDs, MLAs, MPs and council groups.

“I thank them, and their families who have supported them as public representatives, for their hard work and commitment to the people of Derry and the north west as we all work collectively to rebuild the party and advance the cause of Irish unity in the city.”

She confirmed that the procedures to select replacements for the two Foyle MLAs will begin this week.

“I will be in Derry this Thursday, August 26, for a series of engagements and that night nominations will open to select candidates to represent the Foyle constituency.

“Nominations will remain open until September 5 and a selection convention will be held in Derry on 8th September in time for those selected to take their seats in the Assembly on September 13 at the beginning of the new sitting.

“This is an exciting and historic opportunity for Republicans to come forward and help drive the process of reorganisation and change in Derry and across Ireland as Sinn Féin is on the cusp of leading government, north and south, and of achieving a referendum on Irish Unity.”

Speaking after the announcement by the party’s president, Martina Anderson said: “It has been a privilege being a Sinn Féin elected representative for the last 14 years. I thank all of those who put their trust in me to represent them as an MEP and an MLA.

“It is equally a privilege being a Sinn Féin activist and a member of the National Officer Board tasked with an international responsibility to help secure support for a unity referendum.

“I decided to take up my new role immediately to give the newly selected candidates an opportunity to establish themselves as public representatives in advance of the next Assembly election.

“This is a period of huge change and opportunity for the party, for our Irish unity platform and I’m looking forward to taking on my new role and a fresh challenge.

“Like everything I have done I will give it my all to achieve the reunification of Ireland so the people of this island can have a future together within the EU.”

Karen Mullan said: “I want to thank the members of Derry Sinn Féin for the opportunity of being MLA in the city for the party the last four years.

“It was a real honour and privilege to represent and work for the people of Derry.”