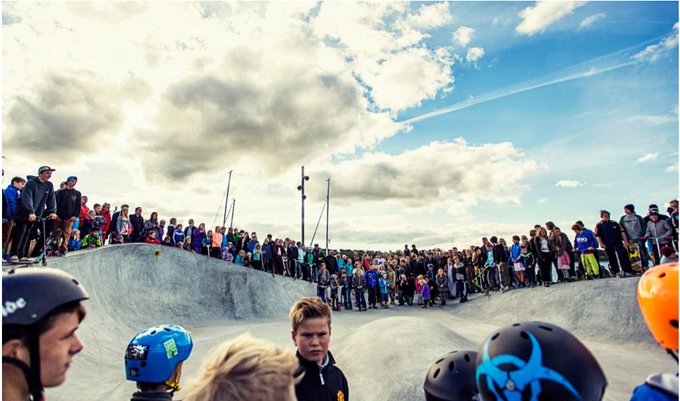 THE proposals for the city’s first skate park have reached a key stage following the launch of a consultation exercise with residents living in close proximity to the two short listed sites.

The potential sites under consideration are located under the Peace Bridge in the Waterside and adjoining the Foyle Valley Railway Museum in Foyle Valley Park on the city side.

Residents of both Browning Drive and the Foyle Road will have received a consultation pack of what the facility may look like and have been asked to give their views and comments on the site selection.

Elected Members approved funding of £20,000 towards design and development costs in October of last year.

“The proposed new Urban Sports Facility would be a significant addition to the recreation facilities in the city and offers a safe environment for local skaters to practise their craft,” he said.

“As a Council we recognise the potential of Urban Sports to create more opportunities for people to be physically active and the numerous benefits they offer including improved health and wellbeing, social interaction and community cohesion.

“We are always striving to improve and develop outdoor recreation opportunities for residents and have shortlisted two suitable shared space sites within the city for the development of the Urban Sports Park.

“I would appreciate if as many residents as possible can contribute to the consultation process so that we can create the most suitable facility possible as the project enters the design phase.”

The Derry Skate Park Committee submitted an 11 page proposal to Derry City and Strabane District Council last year and met with then Mayor, Councillor Brian Tierney, to discuss the plans.

The Committee also submitted a petition to Council calling for a Skate Park in the city.

A spokesperson for the Derry Skate Park Committee added: “Skate Parks bring so much life to an area and offer a safe outlet for people to exercise and practice their skills.

“They also offer the chance for people not interested in the mainstream ball sports to get out and express themselves.”

Urban Sports comprises of skateboarding, BMXing, parkour, roller skating and is becoming increasingly popular within the City and District.

The sports have evolved over the years from their beginnings in the 1960’s to being an integral part of many peoples’ lives and an important feature in our public spaces.

In 2021, skateboarding and BMXing were introduced into the Tokyo Olympics bringing increased visibility and profile to the sport.

The consultation document explains how the two proposed sites were selected and illustrates images of an existing Urban Sports Park in Denmark as an example project.

No decision on a preferred location has been made.

Residents can send their views and comments on the site locations to helen.turton@derrystrabane.com no later than the 15th September 2021.

A copy of the consultation document is available on Council’s website should other residents wish to comment on the proposals.