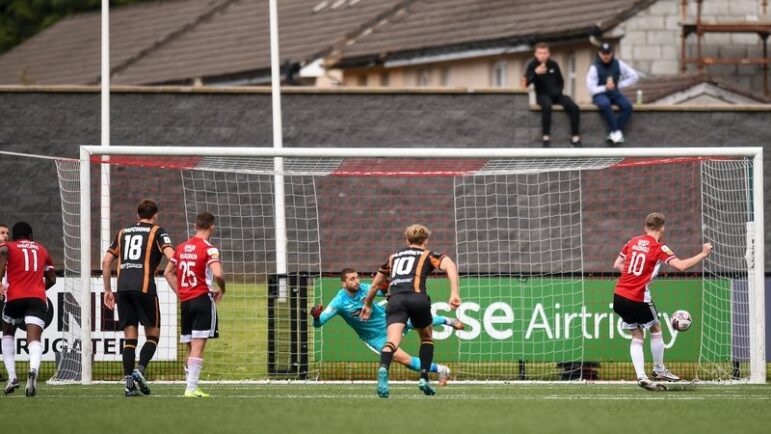 Jamie McGonigle spot on as Derry see off Dundalk

A Jamie McGonigle penalty in the second half sealed a deserved victory for Derry City as they ran out 1-0 winners over Dundalk.

The massive win was watched by the largest attendance at Ryan McBride Brandywell Stadium since the easing of lockdown restrictions.

The Dungiven man’s effort made it two goals in his last two games and leaves The Candystripes on fifth place on equal points with Bohemians but the Bohs have a better goal difference.

But Derry could really have won by a bigger margin, as they always looked a threat on the counter attack.

City went close to taking an early lead but McGonigle headed over on four minutes, after Ronan Boyce’s superb right wing centre had picked out the front man at the back post.

The visitors were forced into two changes in the opening 45 minutes with both McEleney and Daniel Kelly going off injury for Will Patching and Greg Sloggett respectively.

Just before the break McMillan went close as his volley at the back post was saved by Gartside and moments later the Dundalk front man went close again, this time his long range strike was saved at the second attempt by the Derry keeper.

Right on the stroke of the break the woodwork denied Derry, as Joe Thomson did well to superbly get away from Raivis Jurkovskis, after controlling McGonigle’s through ball, but his low drive came back off the post.

Derry took the lead on 51 minutes from the penalty spot, when McGonigle fired home from 12 yards, after his initial strike was handled inside the box by Andy Boyle and referee Damien McGraith rightfully pointed to the post.

On 73 minutes substitute Pat Hoban found Michael Duffy, but the Derry man’s header was saved by Gartside. The visitors were reduced to ten men in unfortunate circumstances when striker McMillan had to be stretchered off on 85 minutes and after already making their three substitutes they were unable to replace the striker.

City were inches away from adding a second soon after when Akintunde’s teasing left wing cross would have found substitute Will Fitzgerald, but for Boyle tremendous glancing touch to head clear.

Next up for City is an away encounter at Sligo Rovers this Saturday, August 21 (kick off 7.45 pm).