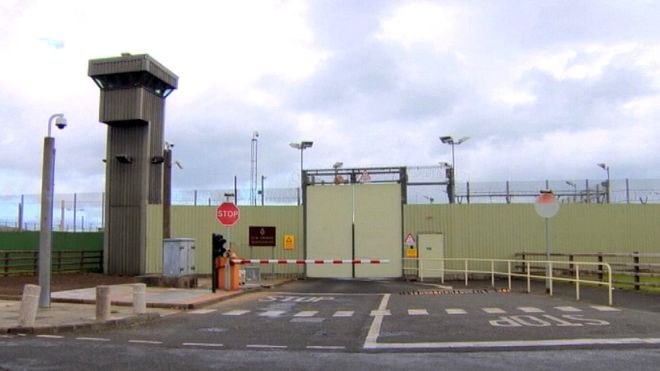 Martin McGill being held at Magilligan prison in Co Derry

A PRISONER hospitalised after suffering a stroke has launched a legal action after he was forced to isolate for ten days on his return to jail.

The 49-year-old has been held in isolation at the Co Derry prison since his return.

The prisoner suffered a stroke earlier this year and was then taken to the Causeway Coast and Glens Hospital for treatment.

His solicitor Aiden Carlin told the newspaper that his client is being “denied access to domestic and legal visits/Zooms and out-of-cell exercise”.

The lawyer said McGill has been told that he requires further hospital assessment.

“He, therefore, seeks an assurance that if this means an overnight stay, he will not be returned to quarantine for a further two weeks of isolation,” said Mr Carlin.

“We respectfully submit that he should he should have been placed in an appropriate cell upon his return to Magilligan and should not be in quarantine for a further two weeks if he is hospitalised overnight in the future.

“To do so, would amount to inhuman or degrading treatment or punishment in breach of Article 3 of the ECHR (European Convention on Human Rights).

Mr Carlin said he has requested “all material relating to Magilligan’s police, Public Health Agency guideance, and decision-makingon the blanket approach to Covid quarantine regardless of where and why the prisoner was away from the jail.

The Prison Service said it does “not comment on individual cases”.