THE widow of Derry IRA proxy bomb victim Patsy Gillespie has revealed how she struggled to believe he was dead.

Mr Gillespie (42) was killed after being forced to drive a 1,000lb bomb into the permanent British army checkpoint at Coshquin in October 1990.

He and five British soldiers died in the subsequent explosion.

A cook at the British army’s Fort George camp in Derry, he was taken from his home by PIRA before being chained to the bomb vehicle and told to drive it into the military checkpoint.

He had previously been forced to drive a bomb into his place of work but on that occasion escaped.

In a recent podcast by Peace by Piece his widow Kathleen Gillespie remembered her last conversation with her husband.

“They let him in here to the living room to say goodbye to us,” she said.

“He sat down on the arm of the chair beside me (and said) ‘everything will be alright girl, it will be OK’ and they took him away with them.

“I didn’t worry about it because I thought it was going to be the same as before.”

Ms Gillespie said that her husband was taken from her home around midnight but the explosion that killed him did not take place until 4am.

“I call it the purgatory hours because he must have known he wasn’t getting home again from then on,” she said.

“I console myself in the fact that they couldn’t hurt him physically because they needed him to do the job that they wanted done.”

Mrs Gillespie said she struggled to accept her husband was dead.

“I went through a stage where I thought Patsy is not really dead, he got free and he is in hiding somewhere,” she said.

She explained how she had packed her suitcases and was “ready to run”.

“You must realise there was no body, I had no body,” she said.

“I had a closed coffin and so I had no proof that Patsy was dead.

Mrs Gillespie said it wasn’t until an inquest was held that she was confronted with the reality.

“I hadn’t accepted that Patsy was dead…until the inquest when they started talking about numbered body bags and body pieces,” she said. 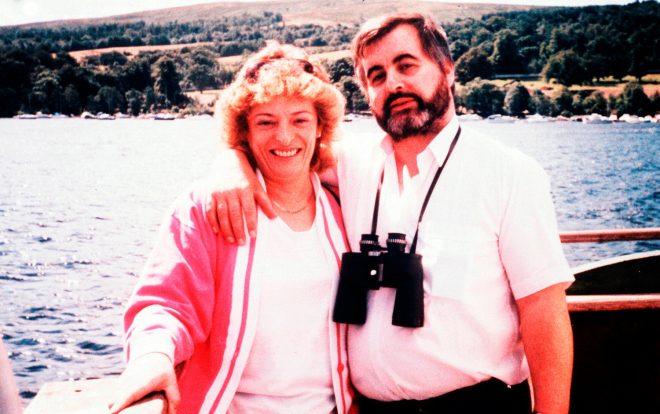 She reveals how she was impacted by the details she heard.

“One policeman during the course of the investigation of the bomb site said about lifting a stone and he found a human heart and digging down he found a (buttock) cheek as well,” she said.

“When I thought about it, I thought ‘he is talking about bits of Patsy’s body.

“I just got up and I ran out. I was told that I had to be at the inquest.

“I was told afterwards that there was no necessity for me to be there.”

Mrs Gillespie reveals that after her husband’s death she considered taking her own life but that she later began peace and reconciliation work and has talked with members of former paramilitary groups although explains how she struggles to forgive those who killed her husband.