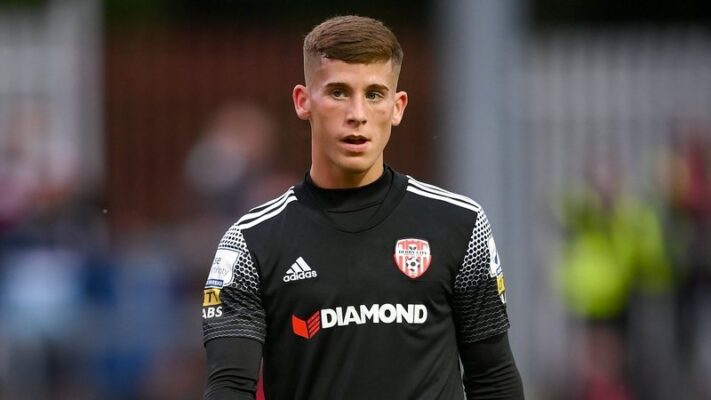 DERRY City advanced to the second round of the FAI Cup courtesy of a 4-2 penalty shootout win against nine-man Drogheda United at Head In the Game Park after the game finished 1-1 at full time.

19-year-old Evan McLaughlin scored the winning penalty, the pick of the shootout, while Nathan Gartside saved from James Clarke and Killian Phillips to allow Derry to progress.

Dinny Corcoran’s goal at the very end of stoppage time at the end of the first half had Drogheda in front.

However, that was cancelled out by Danny Lafferty’s 96th minute leveller from the spot, the left-back doing what Junior couldn’t earlier in the game.

After Dane Massey’s dismissal for a handball on the line, the Derry striker saw his penalty hit the post. Despite having at least one extra man for 40 minutes, Derry looked as if they wouldn’t do enough to force their way past a dogged and determined Drogheda rearguard.

That was until Lafferty’s late intervention from 12 yards.

By that stage, James Brown and boss Tim Clancy had also been sent off.

Corcoran’s opener arrived in the third minute of stoppage time at the end of the opening 45. After earlier failing to make the most of two chances, the veteran – pictured above – made sure with a close range finish.

Dane Massey’s throw from the left was controlled by teenager Killian Phillips, who drilled the ball across goal. Corcoran stuck out a leg to divert in.

Derry had some sighters of goal before falling behind. Will Fitzgerald was denied by Massey’s block and then as Junior surged into the area, the three-time cup winner was again in the right place to cleanly win the ball.

Ruaidhri Higgins’ side were denied a penalty when Ronan Boyce went down in the area, but referee Paul McLaughlin was unmoved.

Derry eventually did get their spot kick when United were reduced to 10 men just seven minutes into the second half.

James Akintunde beat his man on the left and delivered a cross which ran through to Junior at the back post. The striker had an open goal to shoot at and would have scored not for Massey’s intervention on the line.

The referee said Massey used his arm and produced red. Junior’s penalty beat McCabe, who dived the wrong way, but not the post.

McCabe did produce a fine save to deny Akintunde as Derry pressed. The forward took the ball off the toe of Phillips in the area but his low effort was blocked by the goalkeeper’s leg. Joe Thomson threatened the home goal with a couple of long range efforts.

There was still time for Brown to be shown a second yellow after McLaughlin deemed him to have dived during a rare foray into the Derry area. Clancy was sent off too for his protestations.

Then, McLaughlin signalled when Junior and Luke Heeney collided in the area, with less than a minute of time remaining. Lafferty succeeded from 12 yards.

He was off the field by the time the shootout arrived but it may not have come to that had sub Patrick Ferry not fired over the onrushing McCabe deep into extra-time. Then, Orrin McLaughlin’s 120th minute free kick bounced away off the upright.

Thomson, Junior, Cameron McJannet and McLaughlin notched for the Candystripes while Jake Hyland and Heeney scored, in vain, for Drogheda.