THE Stormont Executive has given the indicative date of July 26 for the next relaxation of Covid-19 restrictions.

The proposal was agreed on Thursday and must be ratified on July 22 when Stormont ministers meet again.

Theatres and concert halls will also be allowed to reopen on 26 July.

Social distancing of 1m (3ft) will remain in place after theatres and indoor seated venues reopen later this month.

She said the theatre holds 146 people but even with audience members sat 1m apart, she predicts it can hold 20-30 people at a time.

“We’ve lost count of how many performances we’ve postponed, changed dates or adapted for,” she told the BBC’s Good Morning Ulster programme.

“I normally plan nine months or a year in advance but that’s all out the window.”

She said the Playhouse had been producing and streaming performances online throughout the pandemic.

“It’s the news we’ve been eagerly awaiting and we’ve been planning for the eventuality of audiences coming back at any stage,” she said.

“We just needed the green light and we just have to adapt really.”

She said before the pandemic, the theatre had an unreserved seating plan but social distancing meant it would have to move to assigned seating.

“People are really keen to support the arts, they see what happened to the industry,” she added.

Oliver Corr, arts development officer for Craic Theatre and Arts Centre in Coalisland, County Tyrone, said his industry had been “left in jeopardy”.

He said the theatre had several shows ready to go as well as touring companies booked to perform, but the changing guidance had caused issues.

“Our theatre is only a 200 seater and to make it viable we need to be getting a full house,” he said. 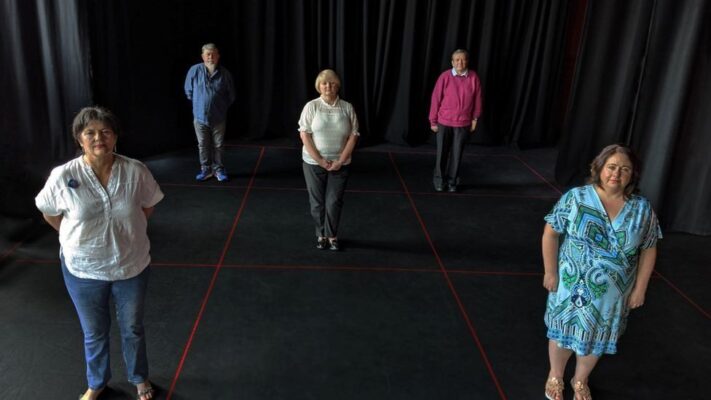 Cast of Anything Can Happen 1972: Voices from the heart of the Troubles at the Derry Playhouse

He said it was “incredibly difficult” to plan future performances because “we are a small theatre and for us to reduce the capacity in any way would hamper us”.

“If a show is cancelled or if the restrictions are extended last minute, it’s money we would find hard to recover,” he added.

In England, face masks will no longer be legally required and distancing rules will be scrapped when the final coronavirus restrictions end on 19 July.

Mr Corr said the “mixed messages coming from government” have made it tough for the theatre industry in NI.

He said if social distancing remained in place in theatres in the long term “it’s going to have a devastating effect financially for the whole sector”.

“There’s real dangers here of jobs being lost and companies going out of business,” he said.

He added that a potential solution would be for audience members to prove they have been fully vaccinated before being allowed into a theatre.

“If we can’t open safely and fully, we need support because we’re going to lose the arts sector,” Mr Corr said.

“The arts sector here is a very important and vital part of the economy but people don’t seem to believe that it generates huge amounts of revenue every year.”

Earlier this year, the Department for Communities announced £10m of funding for the arts and creative sector.