Stormont ministers will meet later to decide whether to relax more of the Covid-19 restrictions on Monday, July 26.

It is understood that is the new indicative date being proposed for theatres and conference halls to reopen.

The requirement for face coverings to be worn in places of worship could also be removed then.

The proposals would need to be ratified at an Executive meeting on Thursday, July 22.

The plans set for discussion at Thursday’s executive meeting mean that the North of Ireland will not directly follow the approach British Prime Minister Boris Johnson has outlined for England.

He announced on Monday that masks would no longer be required and social distancing rules would be scrapped for England at the final stage of his government’s plan.

That stage is expected to be 19 July after a review of the latest Covid-19 data on Monday.

However, some Stormont ministers including Deputy First Minister Michelle O’Neill had already said the North of Ireland would “not be following that model”.

It is understood that July 26 has been proposed to ministers as an indicative date to allow:

the return of conferences and exhibitions

That date is also being proposed as the date to remove the legal requirement for the wearing of face coverings in places of worship and making it guidance only.

It is understood ministers are also being asked to consider removing the guidelines for students to wear face coverings in classrooms and school “bubbles” but that, along with other measures, would be subject to public health conditions at the time.

Stormont ministers will also consider a proposal to allow people who are fully vaccinated to return from so-called amber countries without having to isolate.

The government’s Transport Secretary Grant Shapps is expected to set out plans for England later.

It is thought the Stormont executive is being asked to allow similar measures for the North of Ireland to take effect before the end of the month.

If approved by ministers there will still be a requirement for people returning to NI to book a PCR test on day two.

It is believed all of the measures would still need to be rubber stamped closer to the time at an executive meeting on Thursday, July 22.

Theatres and some other audience venues have been closed or had to restrict numbers throughout the pandemic because of social-distancing guidance.

They had previously been given an indicative date of June 21 for their reopening but the executive has so far delayed that.

Some other indoor entertainment venues such as cinemas have been allowed to resume trading.

Sir Michael McBride, the North’s chief medical officer, has expressed concern about mixed messages on issues such as masks.

“It’s important that we guard against sending the public mixed messages about the evidence around matters such as face coverings and the benefit of face coverings,” he said. 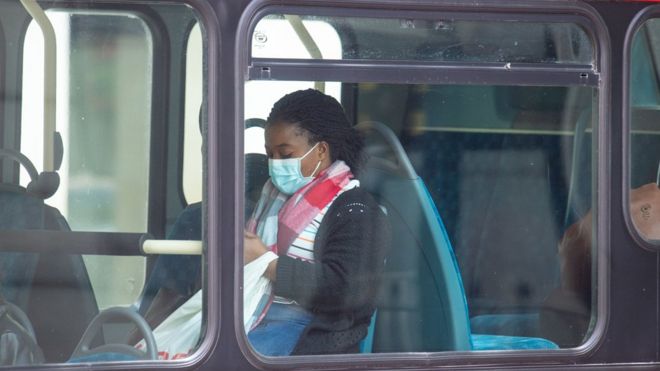 its been compulsory since July 10, 2020 to wear a face mask on public transport

Infrastructure Minister Nichola Mallon is expected to meet representatives from the Unite union ahead of the executive meeting.

It is understood they have written to her about talk of ending mandatory use of face coverings on public transport and the risks it could bring for staff and customers.

On Wednesday, Ms Mallon said changes needed to be made “at the right time” and she saw no evidence to suggest the mandatory use of face coverings should be ended on public transport.

“The data tells us it acts as a mitigation against the virus but it also gives passengers confidence to come back on to our public transport network,” said the SDLP politician.

Asked if she felt the differences between Covid rules in England and Northern Ireland were contributing to mixed messaging, Ms Mallon said she did not believe it was “wise to blindly follow” another government.

“Always with Boris Johnson you need to look beyond the rhetoric, the prime minister has given a date but has strongly caveated that it will be dependent on the data,” she added.

“I want to reassure people that whatever our differences at the executive table, we will look at NI-specific data to ensure we’re taking the right decisions.”

But DUP East Derry MP Gregory Campbell said he wanted ministers to “reach a unified position which offers confidence and hope for people in the short term”.