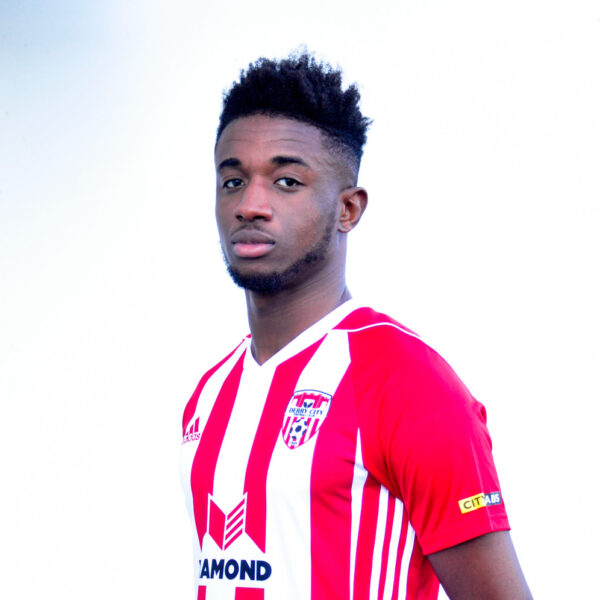 Junior Ogedi-Uzokwe has returned to the Brandywell on loan until the end of the season as Ruaidhri Higgins continues to bulk up his squad heading into the second half of the season.

The London-born forward enjoyed a prolific 2019 season with the Candystripes, finishing as the league’s top scorer with 14 goals.

That led to a move to Israeli side Hapoel Gedera, however a global pandemic was to cut short his experience there.

Junior signed for Sligo Rovers for a season on his return to Ireland before being picked up by Dundalk and is now back north of the border for the rest of the campaign at least.

He was a firm favourite with City fans who will be hoping that he finds something like his previous form for the club.

Ruaidhri Higgins certainly hasn’t been letting the grass grow under his feet at the start of the summer transfer window and the City manager was very happy to get the player in.

“Junior is a player I’ve always liked- he scored against us a couple of times while I was at Dundalk and I’m delighted to have him here.

“Bringing Junior adds to the real quality options we have in attack.

“He’s a player I’m really looking forward to working with and I’d like to thank Jim Magilton at Dundalk who worked closely with Paddy McCourt behind the scenes to get this over the line.”

The player himself was pleased to be back in the city and was looking forward to getting going at the Brandywell.

“I had a great time when I was here before and had a fantastic relationship with supporters” he said.

“The pandemic spoiled everything in terms of Israel but to be fair I’ve enjoyed playing at any club I’ve been at.

“I can’t wait to get started at Derry City and I’ll be doing everything I can to be back scoring goals.”