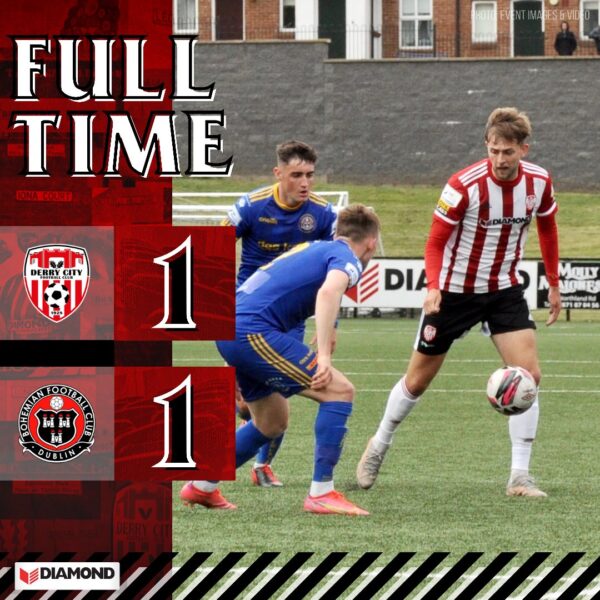 WITH around 155 fans back in the Ryan McBride Brandywell Stadium for the first time in 15 months, it looked like they would go home disappointed with a 1-0 defeat to Bohemians.

But in the dying moments of five added minutes, Mark Walsh’s sweet left foot saved the night with a strike from near the goal line to grab Derry City a much deserved point in a 1-1 draw (kick off 7.45 pm).

Bohemians had taken a late lead when Ali Coote opened the scoring in the 83rd minute.

Derry are still looking for a first home Premier Division win this season.

They have now lost four and drawn four of their eight outings at the Brandywell, but Friday night’s late point did move them up a place in the table to seventh.

Coote’s opener was a fine strike from just over 20 yards out, with the winger letting the ball roll across him before drilling a low shot past Nathan Gartside and into the corner.

It looked like Ruaidhri Higgins’ men had missed their last chance to equalise when sub Jack Malone guided a free header straight at keeper James Talbot in the closing stages.

However, fellow sub Walsh grabbed his first Derry goal when a Danny Lafferty cross made its way to him at the back post and his shot looked to be saved by Talbot but he was behind the line so the goal stood.

The best effort on goal of a very close first half came in the final minute when Derry’s in-form Will Patching forced an excellent save from visiting goalkeeper James Talbot.

Derry had started the match brightly and Lafferty was too high when he tried to chip Talbot from distance and just a few moments later Ronan Boyce headed over the crossbar from a Patching free-kick.

The Candystripes had a few penalty appeals turned down before Dawson Devoy had Bohs’ first opportunity of the evening when he went through on goal, but could not find the target. 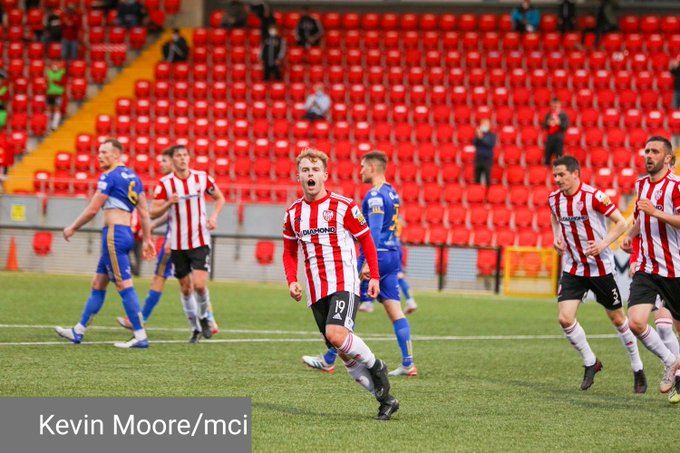 Mark Walsh celebrates after scoring the equaliser for City

Derry goalkeeper Nathan Gartside then saved easily from Ross Tierney before an engaging first half drew to a close with that Patching free-kick.

Bohs were on the front foot immediately after the break and almost scored seconds after the restart, before a last-ditch challenge by Ronan Boyce managed to cut out a dangerous Tierney cross.

Next up for City is away away league match against North West rivals next Friday night, June 18.