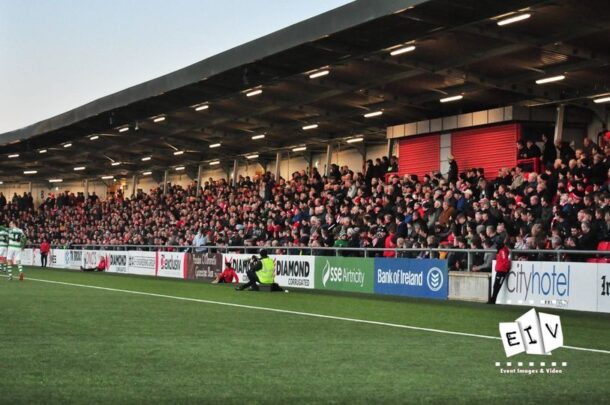 FOR the first time in 15 months, fans will be back at the Ryan McBride Brandywell Stadium this evening as Derry City play host to Bohemians in the SSE Airtricity League.

Only a small number of fans, around 155, will be allowed in for the match (kick off 7.45 pm) under Coronavirus health regulations.

City manager Ruaidhri Higgins has warmly welcomed the news that at least some fans will be in attendance tonight.

Both teams went into the break on a decent run of form.

Keith Long’s side taking 13 points from their last 6 league outings since losing to their hosts at Dalymount at the end of April.

City have lost just once since Higgins took the reins, but he is well aware of the task at hand.

“They’re flying – they’ve scored 15 goals in their last 5 league games so we know the kind of quality they have in attack,” said Higgins.

“We have to be on our guard and be ready for that and our plan will be to create problems for them at the other end of the pitch. We’re well capable of that.

“It will be brilliant to have supporters here.

“I know it might only be a few to start with but the players and staff are really looking forward to having them back and I’m sure they’ll make plenty of noise.”

On the team front, Danny Lupano is injured and won’t play any part while Darren Cole is suspended.

The game will be streamed live on the new LOITV service.

The game will be broadcast on the new SSE Airtricity League streaming service, LOITV.

LOITV offers the opportunity to watch City’s games up for the rest of the season.

A Premier Division Season Pass costs €79 or individual game passes can be bought for €5.