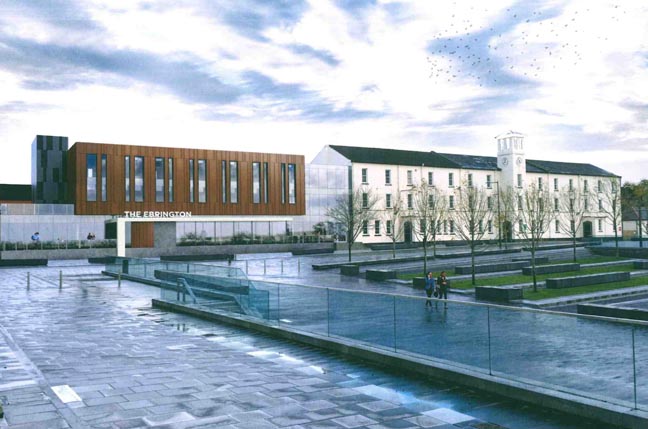 Green light given by planners for Ebrington developments

ELECTED members of Derry City and Strabane District Council’s Planning Committee have approved a number of applications in relation to the Ebrington site.

The first one related to an application for Listed Building Consent for the alteration and extension of the former military building at Building 40, Ebrington, to provide a bar/restaurant, landscaping and associated works.

They were informed that the extension will not extend beyond the eaves level of Building 40 and how the existing staircase and the existing outbuilding will be included in the plans.

As part of the proposal, members heard how there will be outside seating provided in the covered walkway at basement level and to the front of the existing building.

Recommending approval, planning officials informed elected members that the materials will complement, the historic setting and that all works will be conservation-led and undertaken by skilled contractors with proven experience of working with listed buildings and scheduled monuments.

The application was approved by the Committee subject to a small number of conditions.

In a separate application, full planning permission and listed building consent was granted for the removal of the existing rear extension and its rebuilding at Building 63 Ebrington Square.

Members of the Planning Committee were informed that Building 63 is the former Officers Quarters and Captains House, and is a two storey white rendered Georgian building with basement level located at the north east corner of the Square onto the Parade Ground.

They heard how the planned development will see the refurbishment works to this listed building to include the removal of the existing unstable rear return and replacement with a like for like extension.

Planning officials at yesterday’s meeting, recommending approval for the application said they were of the view the building will make a positive contribution to the townscape of the surrounding area as well as the overall redevelopment of the Ebrington site and that the proposed build is in accordance with Policies BH1, BH2, BH3 and BH4 of PPS6.

Elected members voted in favour of the recommendation and approved the application, subject to conditions.

Welcoming the decision, the chairman of the Planning Committee, Cllr Christopher Jackson said he was delighted to see work continue to progress at the Ebrington site.

He said: “These proposed plans are another positive step towards completing the transformation of this strategically important regeneration site.

“We are delighted to see these projects advance and look forward to seeing Ebrington continue to develop into a business and cultural hub that everyone can enjoy.

“These latest planning applications come just a month after we approved a number of developments at the site including the change of use, refurbishment and extension to the guard house at Building 10 and 10a and plans for change of use at Buildings 85 and 85a.”