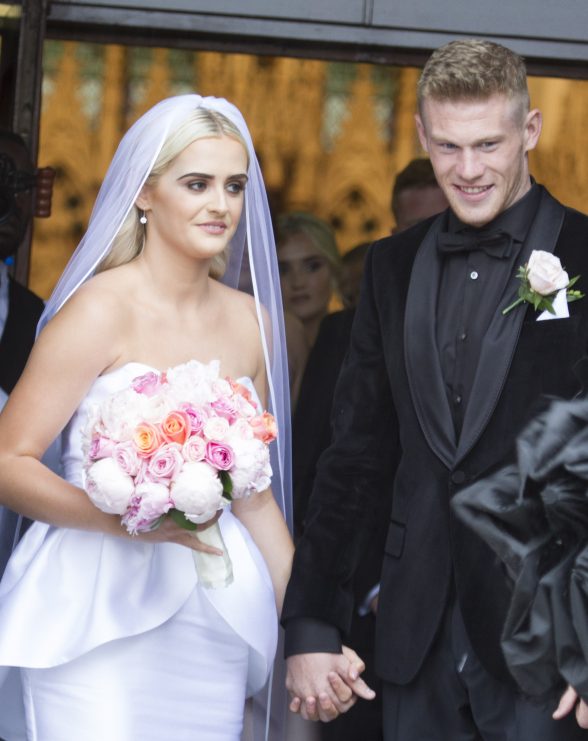 REPUBLIC of Ireland winger James McClean has had to endure “nine years of constant abuse” since moving to England, says his wife Erin McClean.

Stoke City’s McClean, 31, this week shared a direct Instagram message that threatened to set his family home on fire, in a string of abusive messages.

Erin said someone has previously threatened to “take a gun with them to a certain match”.

“I still remember watching that match in absolute fear on the TV,” she added.

The Professional Footballers’ Association, Football Association of Ireland and Championship club Stoke have all released statements condemning the abuse.

“There isn’t a day that goes by that either one of us don’t receive a message of some sort, whether it be a threat or telling us to get out of England,” said Erin in a post shared on social media.

“We’ve been spat on, shouted at. Nights out have been ruined by people making remarks towards him.

“We have tried as hard as possible to keep them away from it all but there have been times when we’ve been out shopping and there are people making remarks towards James in front of the kids.

“We can take the name-calling and the rest but what we cannot accept is threatening our family home and our children’s lives. They don’t deserve this.”

FAI chief executive Jonathan Hill said: “To abuse or threaten James or any player because of his nationality should not be tolerated by society.

“Unfortunately, such behaviour is all too common now on social media.

“Only last week we commended the stance taken by English football against the abuse of footballers across all social media channels and we are examining how best we can take a similar stance.”

Stoke added that they would “continue to work with the authorities to bring the perpetrators to justice”.

The FAI’s intercultural programme is currently working on new racism and discrimination policies, which are expected to be presented to the governing body’s executive board in the coming weeks.

Creggan-born McClean, who represented Northern Ireland up to under-21 level before opting to play for the Republic of Ireland, has frequently been the target of social media abuse and has in the past received death threats.

Several professional footballers have received online abuse in recent weeks, prompting football authorities to write to Facebook and Twitter demanding they do more to prevent such activity.