THOUSANDS of relatives of Troubles victims have signed an open letter calling for the British and Irish governments to fully investigate decades of violence.

It calls for the long-delayed set up of an independent team of detectives to pursue new prosecutions and other measures to recover information.

These are measures included in the 2014 Stormont House Agreement.

The letter is addressed to Taoiseach Micheál Martin and UK PM Boris Johnson.

It asks for their assurances that their “human rights as victims will no longer be disregarded or denied”.

“The peace process has repeatedly failed to deliver on our rights to truth, justice and accountability,” they said.

The letter, signed by 3,500 relatives, is being published in the Irish News, Andersonstown News, and US publication the Irish Echo. 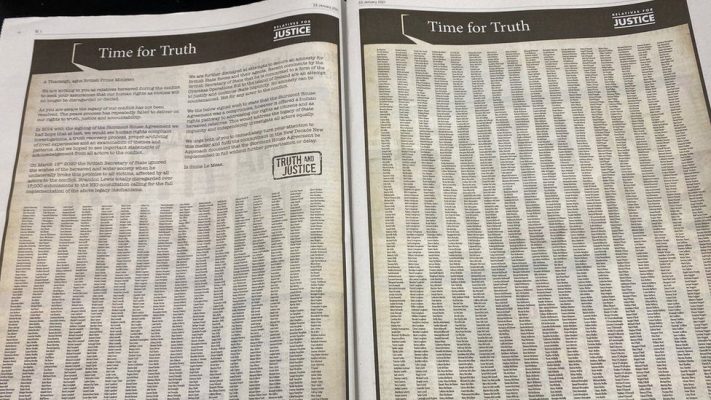 The letter is being printed in several newspapers today

More than 3,600 people were killed during the 30 years of Northern Ireland’s Troubles and thousands more injured.

The British Government has pledged to “intensify” engagement with victims’ groups in addressing the legacy of the past.

The Stormont House proposals included a new independent investigation unit to re-examine all unsolved killings and a separate truth recovery mechanism to enable families to gain answers in cases where prosecutions are unlikely.

Last March, the government set out new thinking on dealing with the past, which radically departed from what had been proposed in the Stormont House Agreement.

Secretary of State Brandon Lewis proposed that after a paper review exercise, most unsolved cases would be closed and a new law would be enacted to prevent the investigations from being reopened.

Mark Thompson, chief executive of Relatives for Justice, said about half of those who signed the open letter are 35 years and under.

He said the letter “represents the current and future generations” and that it “underlines the ongoing trauma and intergenerational impact that the killing of a relative has also had on surviving families”.