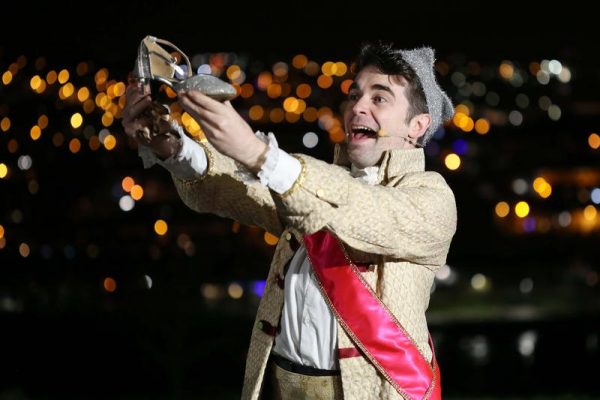 The Show in Your Street presentation of Cinderella at Eskaheen View, Derry, by Blue Eagle Productions. Prince Charming. Picture by Conor O’Kane

OH yes she did! Cinderella did go to the ball.

And the leading lady was also among a host of local stars who brought some festive magic to the streets of Derry.

It was literally a case of she’s behind you as north west based theatre company Blue Eagle Productions staged a quick-fire version of the fairytale classic in a number of local housing estates.

With the well-known panto cast from the Millennium Forum away from their usual venue closed due to the COVID-19 restrictions, producer/director Jonathan Burgess ensured the popular live show would still go on in a new outdoor format apty titled as ‘The Show In Your Street’.

The fun and frolics of the traditional Christmas show were instead transported to local communities in the Waterside area of the city for six evenings of street entertainment.

Thanks to Organisations Emergency Programme funding from the Arts Council of Northern Ireland and Department for Communities, the performances lifted spirits and provided some light relief for adults and children alike who are missing out on all the festive shows which usually take place in schools, theatres and community centres during the Christmas and new year period.

Blue Eagle Productions producer/director Jonathan Burgess was delighted at the response from the local communities where ‘The Show In Your Street’ brightened up a few otherwise uneventful winter evenings for many households as a result of the ongoing restrictions to reduce the transmission of COVID-19 within the community.

Jonathan said: “With so many indoor theatre events cancelled, we wanted to bring some of the magic of a live show to actual audiences in a safe but amusing way.

The idea was that we would take the show to the people, travelling around various locations where they would be able to view it from their windows, gardens or front walls while still maintaining social distance from other households.”

“We encouraged people to keep well apart from their neighbours to ensure the health and safety of the community was not compromised and the show could continue as planned. Everyone did exactly what was asked of them and this meant we were able to proceed in the spirit intended.”

“By staging the 25-minute production multiple times over the six consecutive dates, we managed to strike the perfect balance of having an appreciative audience without crowding the area and therefore keeping everyone safe while entertained.”

Jonathan added: “There is nothing quite like a live show and the feedback we got from everyone who saw it, young and old, was totally heartwarming. They all really enjoyed the humour and particularly appreciated having the spectacle right on their doorstep.”

‘The Show In Your Street’ was staged in Strathfoyle, Caw/Nelson Drive, Irish Street, Gobnascale, Newbuildings/Magheramason and Tullyally/ Currynierin from December 15-20, amounting to an epic 36 performances for the dedicated cast and crew.

Jonathan added: “I want to add my applause to everyone involved, it was a mammoth task but we were all so glad to have the opportunity to bring the show to life thanks to funding from the Arts Council together with valued support from Derry City and Strabane District Council and the Millennium Forum.

“Our sincere thanks go to Gilly Campbell, Amanda Biega and David McLaughlin respectively from each of these organisations for their support.”

Gilly Campbell, Head of Community Arts and Education at the Arts Council of Northern Ireland, added: “The Arts Council of Northern Ireland is delighted to support Blue Eagle Productions through our Organisations Emergency Programme, a fund that was created to help organisations respond to the immediate impacts of the COVID-19 crisis, helping them to continue producing creative work, assist with operational costs and to help plan for recovery in the long-term.

“We’re thrilled that ‘The Show In Your Street’ was such a success, bringing people and communities together to enjoy the arts safely and adding a real festive atmosphere to local neighbourhoods.

“We know people are really feeling the loss of live entertainment and 2020 has been such a difficult year for those involved in the arts, so it’s great to end the year with a smile. Congratulations to all involved.”