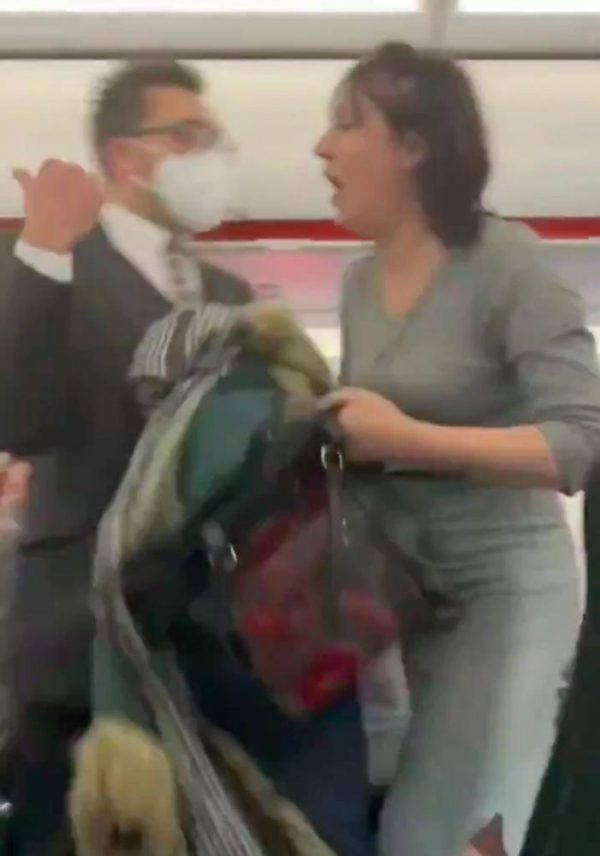 Sarah McGuire on board the easyjet flight last month

A DERRY woman has denied assaulting two men and being abusive to flight crew during an incident on an easyJet plane last month.

Sarah McGuire was filmed apparently giving an anti-mask tirade on board the craft and was escorted from the aircraft at Belfast International Airport.

While defence solicitor Keith Kyle told Antrim Magistrates Court that McGuire did accept a charge of disorderly behaviour at the airport on October 18, the 39-year-old was denying all other charges against her.

According to weekend newspaper reports McGuire, from Tyrconnell Street in the city, entered not guilty pleas to two counts of common assault, behaving in a threatening, abusive or insulting manner towards a member of aircraft crew, being drunk in a plane and refusing to obey the lawful command of an aircraft commander.

The facts have yet to be opened in court but it is understood the charges arise following an incident in a Belfast to Edinburgh flight which led to McGuire being escorted off.

District Judge Nigel Broderick adjourned the case to December 15 when a date will be fixed for her contest. In a video of the incident that went viral on social media after the incident McGuire can be seen being ushered down the aisle by an air steward.

A Co Down teenager who was on the Sunday afternoon flight said it was due to take off at 4.20pm but was delayed for an hour because of the incident.

Meabh Kennedy (19) explained that the woman was taken off the flight for not wearing a mask.

“The woman was taken off the plane because she wouldn’t wear a mask and then she came back on again a second time,” said Ms Kennedy, from Newcastle.

Another passenger said afterwards: “The easyJet staff were really good at handling it.

“They accommodated her when she asked for a row of seats to herself, then they politely asked her to wear a mask.”

European Union Aviation Safety Agency guidelines state air passengers must wear a mask during boarding and at all times when onboard an aircraft except while eating or drinking.