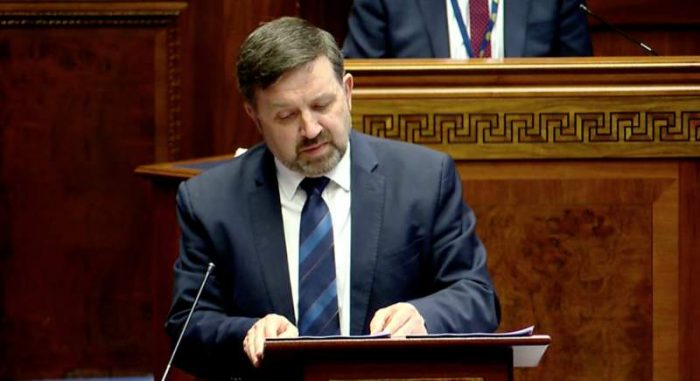 Minister: This will not be a normal Christmas

HEALTH Minister Robin Swann has this afternoon been outlining to MLAs in the Assembly chamber the Executive’s decisions about Coronavirus restrictions.

He said that most of the restrictions reflect those that were implemented at the start of the pandemic in March, with the exception that schools will remain open.

“The onus is now on all of us to strictly follow public health advice and comply with both the letter and the spirit of the tightened restrictions,” he says.

Mr Swann referred to the positive news of vaccinations and said he doesn’t want to have to say to more relatives of loved ones “I’m sorry they are not here to enjoy these better days”.

“This is far too important an issue for political point scoring”, said the minister.

“It won’t be a normal festive season by any means, but we all have the power to help change the atmosphere,” said Mr Swann.

The health minister said “with schools open and existing restrictions in place, the R rate had settled around 1”.

“There has a been a sustained reduction in cases per day,” he said, but added that “ICU occupancy and deaths remain at a relatively high level”.

“The hospital system and staff remain under serious pressure,” said Minister Swann, adding it was “highly likely” that a large reduction in restrictions would have seen the R rate increase above 1 by December.

Mr Swann referred to mass testing, and said relying on it alone would “represent a high-risk approach in the run up to Christmas” which “may not be viable for logistical or test supply reasons”.

He said mass testing is an “exciting development” and along with a vaccine “offers great hope of a way out of our nightmare but it is not a panacea”.

“I will not offer false hope or pretend that there are shortcuts available to get us through these next few months,” says the minister.

He adds “we all must play our part”.T

“The restrictions that start on Friday will make a difference,” said Mr Swann