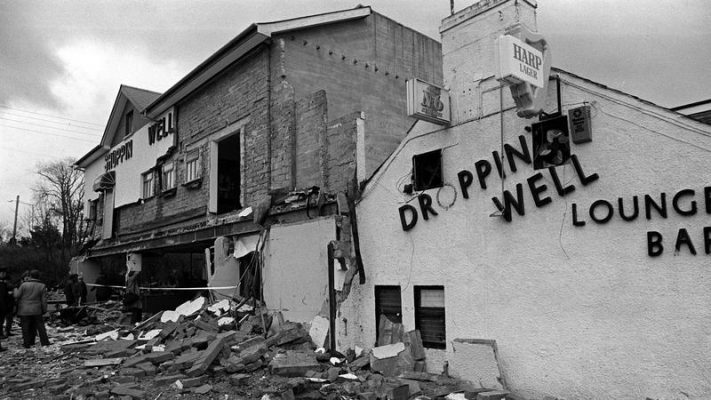 The scene at the Droppin Well pub in Ballykelly in 1982

PROPOSALS by the British Government’s for tackling Troubles legacy cases in the North of Ireland have been criticised as “unilateral and unhelpful”.

In a scathing report, MPs from the NI Affairs Committee also condemned the Government’s lack of consultation with victims’ groups as part of its plans to deal with the past.

MPs were critical of the Government’s decision that only Troubles killings with “compelling” new evidence and a realistic prospect of prosecution would receive a full police re-investigation.

Following an inquiry into the Government’s dealing with the Troubles, the committee, in its interim report published on Monday, said there was “considerable doubt” about their approach to historical killings.

In March, NI Secretary of State Brandon Lewis said that, after a review, most unsolved cases would be closed and a new law would prevent those investigations from being reopened.

The Government’s statement in March marked a significant step away from mechanisms agreed by the UK and Irish governments and main Stormont parties in the 2014 Stormont House Agreement.

The committee said the document’s lack of detail on the proposals was “deeply concerning”.

“Who will decide which cases should be closed and how? Can these decisions be appealed? What’s the definition of ‘new compelling evidence’ and who will decide that?” he said.

“We’d expected those questions and others to be answered in the usual way in written and/or oral evidence, but the Government failed to provide any such evidence. Consequently, this is necessarily an interim report until we receive it.

“We urge the UK Government to urgently provide this evidence and invite the Irish Government to do the same to help clarify the situation for victims.

“Despite assurances that this policy area would be addressed in a speedy manner, it’s seven months since the announcement of the new proposals, and we know nothing more.

“This delay and uncertainty will only perpetuate an unacceptable wait for victims and the families affected that has already gone on far too long.”

Committee members said they were “dismayed” by the lack of consultation and engagement with representative groups’ on the Government’s new approach before and since its publication.

They described Mr Lewis’s statement in March as a “unilateral and emphatic announcement of intent rather than part of a meaningful consultation process”.

“Peace building in Northern Ireland has historically been based on establishing consensus and agreement,” the report added.

“Merely telling parties or organisations what Government either has done or is about to do is not consultation.”

Mr Hoare added: “How we tackle the legacy of the Troubles is, understandably, an enormous challenge.

“Doing so effectively requires engagement and consultation with all parties to get them on board. It is imperative that any new system commands cross-community and widespread support for it to have legitimacy.

“The Stormont House Agreement, not without its weaknesses, had appeared to be the basis on which we could move forward, but the Government’s new proposals are a unilateral departure from that.

“The report found there was a lack of consultation, not even with the very people it is supposed to serve; the victims.

“The move is counterproductive and seems more like a decree than a natural evolution of an agreed framework.”

Mr Hoare said that if the Government fails to include victims’ groups and parties, there is “no buy-in, no legitimacy and no credibility for a way forward”.

He warned this will delay the wait for truth for families.

The committee has also called for the Government to clarify its decision to abandon the model of a separate Historical Investigations Unit (HIU) and Independent Commission for Information Retrieval as set out in the Stormont House draft Bill.

The report said the Government’s document does not explain how the proposed information recovery mechanism will work and that their “radio silence” since has been “thoroughly unhelpful”.

A spokeswoman for the British Government said: “We are moving forward as quickly as we can.

“And we remain committed to working with all parts of the community in Northern Ireland as part of this process.”