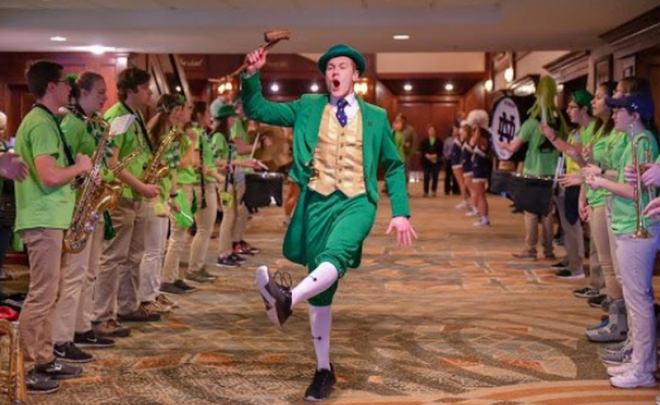 Conal Fagan, also known as LepreConal, is the 2020 leprechaun mascot for the football team at Notre Dame University

AN Irishman working as a leprechaun mascot for the Notre Dame Fighting Irish football team in the USA has said that being part of the heritage is “pretty special”.

Derry native Conal Fagan, also known as LepreConal, is the 2020 mascot for the football team at Notre Dame University in South Bend in Indiana.

Now going into his final year at the university, he spoke to ABC 57 as to what it is like working as the team’s official mascot.

“The leprechaun is such a prestigious position, so having that culture and that heritage and knowing I’m part of that is something pretty special,” he said.

He has been the team’s leprechaun since 2018 and his job involves wearing a green suit and hat, cheer on the crowd at games and supposedly bring magical powers and good luck to the Notre Dame team.

Mr Fagan admitted that trying out for the position was daunting.

The path to the Golden Dome and the Notre Dame sidelines has been anything but a smooth one for Conal. He has spoken of the heartache he has endured and how he stays positive.

“Sometimes I reflect upon and think about all the people who have been on this campus and walked on the same ground that I walked on. Every morning I wake up and see the Golden Dome out my window. It strikes me at times knowing that I’m in America and not Ireland,” said Conal.

The dome is now home for Fagan. It’s over 3,600 miles away from his native Derry.

“I come from a working-class family. Two brothers and a sister and they’re all back at home.

“My parents didn’t go to the university so I am first generation student so it’s pretty amazing being here and being surrounded by this incredible place.”

Back in the North of Ireland, Conal had teachers that pushed him academically and it ultimately led to his acceptance at Notre Dame.

“I was part of an academic program back home to help kids apply to America. There’s 150 people from across the UK that were applying so it’s pretty awesome to be part of that group and see kids all across the US. But I definitely picked the right college.”

While he has enjoyed and cherished his time on campus, there have been tough times.

“It’s been difficult at times as well. When my father passed away and stuff so having to deal with that, as well, was something extremely difficult,” recalls Conal.

Just three months after settling in South Bend, on November 18, 2017, his father passed away. He had been battling Alzheimer’s disease for seven years.

“Coming to America I knew it was going to happen at some point. It was a prolonged illness so I had that in the back of my mind,” says Conal.

“But at the same time it was what would he want me to do. I sort of see this as my legacy. Living my life through him. He constantly in the back of my mind.

Conal is also a gifted athlete.

“I played soccer growing up. I played on the national team under 16 level. I made the practice varsity squad here but I decided to take a step back from it here and take on a new challenge. I was ready to come across the Atlantic Ocean and embrace something new.”

In the spring of 2018 and in the spirit of his Irish heritage, Conal decided to try out to be a Notre Dame Leprechaun.

He jogged to center court, did his best jig and started on a journey to leave his legacy on the university he loves. 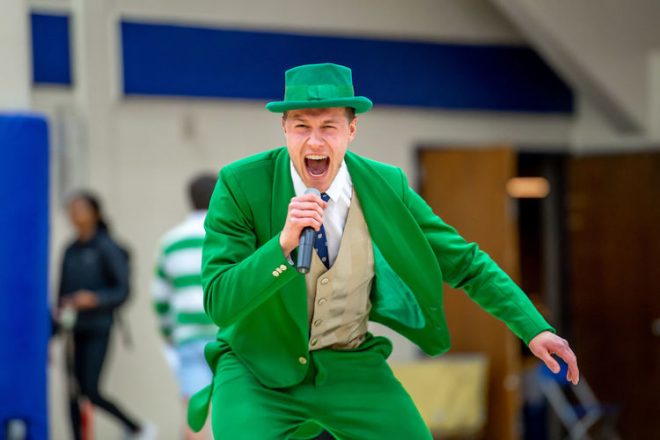 April 12, 2019; Conal Fagan hypes up the audience. Each Leprechaun contestant was asked to lead a pep rally. The other contestants were sequestered in the dressing room as each took his or her turn. (Photo by Matt Cashore/University of Notre Dame)

“That was difficult to adjust to at the start. But like anything else you become accustomed to it and I couldn’t imagine being anywhere else in life.”

Part of the trinity of leprechauns for two straight seasons, there was just one more goal to complete: leading the Irish out of the tunnel at Notre Dame Stadium on football Saturdays.

It’s a goal he has accomplished.

This season hasn’t been ideal due to the COVID-19 pandemic.

He would have been the leprechaun for the Notre Dame game against Navy in Ireland.

But Fagan knows that through heartbreak comes healing, through adversity comes action.

And dreams that started 3,600 miles away, can come true.

“The leprechaun is such a prestigious position, so having that culture and that heritage and knowing I’m part of that is something pretty special,” says Conal.

Not only is Conal the leprechaun and a full time student in his senior year, he works with Catholic charity organizations in South Africa and Ireland.