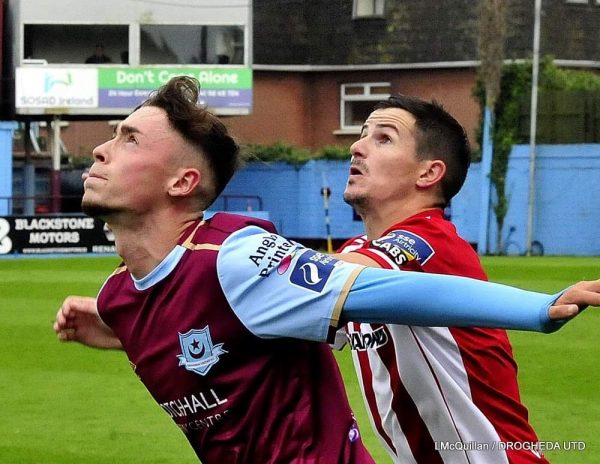 TWO late goals from substitutes Ciaron Harkin and Stephen Mallon pushed Derry City past a spirited Drogheda United and into the last eight of the Extra.ie FAI Cup on Saturday evening.

The game had looked poised for extra time, and perhaps penalties, after 90 minutes of at times frantic football which lacked quality in either penalty area.

United switched off late on and allowed Colm Horgan to cross for Harkin to side-foot in and then Stephen Mallon confirmed the win deep into injury time.

Candystripes boss Declan Devine will have been very grateful not to have seen his players face 120 minutes of football twice in five days.

He made just one change to his line-up following Tuesday evening’s UEFA Europa League extra-time defeat in Vilnius, with Cameron McJannet replacing Colm Horgan in defence.

The five-time winners last won the competition in 2012 in Devine’s first spell in charge and while poised for a tilt at securing European qualification through the league once again, he will have set his sights on bringing silverware back to Foyleside by lifting this competition for the sixth time in the club’s history.

In-form Drogheda posed a difficult obstacle at United Park and it showed in the opening 20 minutes of the first half as the home side used their wing backs to good effect.

Twice Kane countered down the left, once leaving Derry’s Darren Cole and Eoin Toal in his wake before blazing a shot over the bar. Brown’s shot from the edge of the area was as close as the Drogs came to an opener but it was deflected wide.

Derry came more into the game as the first half progressed, with Conor McCormack a driving presence and Adam Hamill growing ever more prominent. The former could consider himself fortunate for only being shown a yellow card for a late tackle on Brown.

Centre back McJannet headed over from under the crossbar and then Hamill’s well hit effort was straight at Drogheda goalkeeper Ross Treacy, making his competitive debut for the club.

United hadn’t beaten a league club in domestic cup action since they produced a win against Shamrock Rovers in August 2018. Tim Clancy picked a team with repeating the trick very much in mind.

He brought in centre back Jack Tuite for Stephen Meaney and changed to a three-at-the-back system aimed at soaking up pressure and hitting the visitors with quick counterattacks.

It also left him with an attack-weighted bench to pick from after the break.

He may not have added them had United taken their chances.

The game opened up considerably in the second half – classic cup fare, you could say – and Derry had their chances too. Hamill teed up Ibrahim Meite who curled a shot wide. The well-travelled Liverpool academy product was at the centre of much that was good about Derry.

He attempted to chip Treacy only to see his effort clear the bar while Joe Thomson failed to trouble the goalkeeper when he shot well wide.

Chances were at a premium late in the end with extra time appearing less a possibility and more an inevitability. That was until Harkin turned in Horgan’s right wing cross in the final minute of normal time.