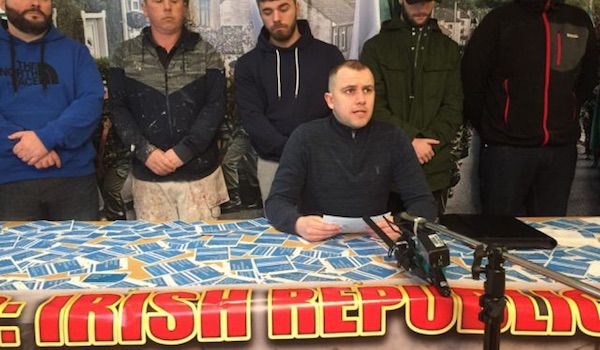 TWO dissident republicans from Derry and four other people have been remanded in custody this afternoon on terror charges over a MI5 bugging operation against the leadership of the New IRA.

Derry Saoradh chairman Joe Barr (32). of Cecilia’s Walk and Gary Hayden (48), of Tyrconnell Street in the city, were formally charged with offences including membership of a proscribed organisation, directing terrorism, and two separate charges of preparatory acts of terrorism.

Barr was kicked out of the USA a number of years ago after he came to the attention of the FBI following a tip off from British intelligence that he was working in New York.

They were among seven men and two women arrested last Tuesday as part of a covert PSNI/MI5 probe, codenamed ‘Operatioon Arbacia’ into the activities of the New IRA across the North of Ireland.

They appeared at Belfast Magistrates Court this afternoon via video link from the nearby Musrave PSNI station custody suite for the hearing which last an hour.

One is 45-year-old Amanda McCabe.

The defendant, from Alisbury Gardens, Lurgan, was charged with directing terrorism, membership of a proscribed organisation and two counts of preparatory acts of terrorism.

A newly married couple have were also arrested over the bugging operation at rented premises in Co Tyrone between February and July this year.

The 49-year-old mother was today charged with membership of the IRA, directing terrorism and preparatory acts of terrorism.

Davy Jordan, who has a previous conviction for possession of a firearm, is the former chairperson of Saorahd, the political wing of the New IRA.

Sharon Jordan, under her maiden name Rafferty, was convicted in 2014 of helping to set up and run a dissident republican training camp outside Omagh, Co Tyrone.

Convicted terrorist Damien McLaughlin (44), who was acquitted in 2018 of charges linked to the murder of prison officer David Black, also appeared at the court via video link.

McLaughlin, who is from Kilmascally Road, Dungannon, was charged with a number of offences including membership of a proscribed organisation, directing terrorism and conspiracy to possess explosives and 100 rounds of ammunition with intent to endanger life.

A ninth person, Kevin Barry Murphy, 50, of Altowen Road, Coalisland, was charged with membership of a proscribed organisation, directing terrorism and preparatory acts of terrorism.

It is alleged from the secret recordings that Murphy addressed those attending the bugged meetings as ‘Chief of Staff’ of the IRA.

A senior detective said a total of 500 police officers were involved in the arrest and search operations last week.

He confirmed to the hearing that ‘Operation Arbacia’ was run by the PSNI and that MI5 were tasked by police to gather evidence of two meetings in Co Tyrone in February and July this year by way of audio and video.

An issue of “entrapment” was also raised by a number of defence solicitors.

A tenth person was arrested on Saturday at Heathrow Airport by detectives from the PSNI’s Terrorist Investigation Unit.

The Irish News reported today that the 62-year-old is a Palestinian man.

His home in Edinburgh was raided by Police SCotland on Saturday afternoon.

He remains in custody after detectives granted further time to question him under the Terrorism Act 2000.

On Saturday, Paddy McDaid (50), from Magowan Park in Derry’s Creggan, faced the same court on directing terrorism, membership of a proscribed organisation and preparatory acts of terrorism.

Also remanded in custody was Shea Reynolds, 26, of Belvedere Manor, Lurgan who also face the same charges along with conspiracy to posses Semtex explosives and ammunition with intent to endanger life.

Both men were remanded in custody until next month.

As no bail applications were made today, all six defendants were remanded in custody to the same date on September 18.