Derry Playhouse first theatre to open in the North

THE Derry Playhouse is aiming to be the first theatre in THE North of Ireland to open its doors to a paying audience for live performances since lockdown in March.

The Artillery Street based theatre is planning productions from the beginning of September, in line with the latest advice from Stormont.

However, capacity has now shrunk from 150 to 20 due to social-distancing regulations.

But the Playhouse has a plan for the empty seats and it involves items that remind people of a loved one.

It is calling on members of the public to donate photographs, letters or other items connected to family members or friends lost in the Troubles or to the Coronavirus pandemic.

These pieces will then be placed on the empty seats in the auditorium, filling the gaps between the 20 members of the audience allowed inside.

The objects will be specially lit to create what the theatre calls a “sunlit absence” echoing a line from Seamus Heaney’s Mossbawn poems.

The first production to allow audiences back into the building will be the play Anything Can Happen 1972: Voices from the heart of the Troubles by County Down playwright Damian Gorman.

It is based on previously unheard stories about what it was like living in Northern Ireland in 1972 – a year when almost 500 people were killed.

Speaking to BBC Good Morning Ulster, Mr Gorman said the idea was to allow people to bring their grief with them to the production. 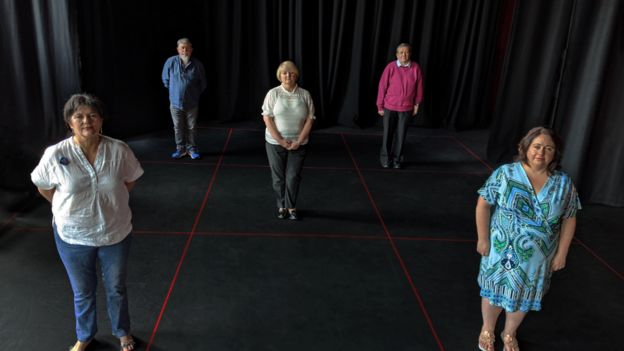 Cast of Anything Can Happen 1972: Voices from the heart of the Troubles

“Grief has a presence, a lamentable presence, so we were saying can we make use of that?” he said.

“Grief is love that has nowhere to go, you can’t put your arms around those people any more and we saw these empty chairs and thought this is somewhere to go.

“If you are someone who lost someone during the Troubles, or even during Covid, or at any other point in life – take it to our place, take it these chairs in a photograph”.

The 16 September is the indicative opening date for the production and it will also be available to watch online.

Theatres and concert halls have been told they can provisionally reopen from 1 September.

They were originally included in the same bracket as cinemas to reopen, but then the executive agreed cinemas could open earlier – from 10 July.

There have been warnings about the long-term viability of operating theatre venues at reduced capacity.

The Arts Council NI (ACNI) has said admitting reduced numbers of people will put many venues in peril.

ACNI produced a 76-page guidance document on how the sector could potentially move forward post-lockdown.

“It is financially impossible for live theatre, concerts, festivals and venues to operate with audience capacity reduced to 20% or 30%,” they said.

“Paradoxically, some of Northern Ireland’s most commercially effective arts organisations will now find themselves the worst affected.”